Think that Downtown Phoenix’s revitalization is all about art galleries and restaurants? Think again. On the morning of October 15, 2009, about 80 people gathered for the Downtown Phoenix Historic Building & Warehouse Tour hosted by Mayor Gordon as part of his monthly breakfast meetings. Participants saw firsthand that law firms, development companies and retailers are also active participants in the preservation and revitalization of Downtown’s historic warehouse district.

The crowd, ranging from city officials to business people, real estate agents, community activists and interested citizens, received a guided tour of three outstanding examples of adaptive use and revitalization. During the tour, we learned about the about the process involved in renovating of these important historical buildings. We also saw firsthand why this Downtown area continues to gain popularity among business owners and residents. 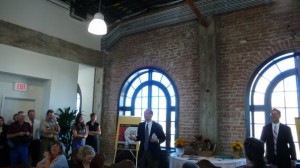 The group met in the top floor of the Luhrs Building at 11 W. Jefferson St. for breakfast and introductions. Dan Klocke from the Downtown Phoenix Partnership and Barbara Stocklin from the Phoenix Historic Preservation Office provided a brief overview of the day’s events as well as some history of the Luhrs Building. Local businessman George H.N. Luhrs constructed the building in 1924 to celebrate the emerging city of Phoenix. The building’s top floor was the original home of the Arizona Club, a social organization of pioneering Valley families. Today, after extensive renovations and repairs by Hanji Urban, it is home to the law offices of Hagens Berman, LLP. Renovations to the rest of the building continue, including cleaning of the building’s brick face and reopening of the transom windows above the street-level storefronts. The building’s rehabilitation is being partially funded by a Demonstration Project Grant from the Phoenix Historic Preservation Office.

The group then boarded Ollie the Trolley (and his partners Dolly and Molly) who transported us to the Anchor Manufacturing Building at 525 S. Central Ave. Built in 1928, the Anchor Building was orginally an iron works factory, notable for producing original iron work installed at the Orpheum Theater. A classic example of adaptive reuse, the building has seen many uses throughout is 81 years life, including an auto body shop, a city bus garage, a beer distributorship and a produce market.

It is now owned by Steve and Andi Rosenstien, and is now home to R&R Surplus, a vintage clothing company. The couple has big plans for the building that is affectionately called “the Duce;” a sobriquet given by the police when the warehouse was home to some more disreputable activities after business hours. Starting in February, in addition to picking up some vintage clothing, you’ll be able to grab a drink from a bar taken from the Black Orchid Club in Chicago (the Rosensteins’ previous home), buy some organic vegetables, sample some ‘vintage’ Milwaukee beers, get a great hot dog, buy a vintage bicycle, or just watch the crowd go by from atop a set a bleachers rescued from the original St. Mary’s High School gymnasium (on the present site of the Arizona Center). Stay tuned to DPJ for more details on the grand opening in the new year.

The next stop on the tour was the Arizona Hardware Supply Building at 22 E. Jackson St. Constructed in 1928 as a warehouse for building supplies, it has since stored ammunition, refrigeration equipment, radios and fans. The building was purchased a few years ago by Dudley Ventures, a developer specializing in community revitalization projects. Leading by example, the company — with the help of a Warehouse and Threatened Building Grant through the City of Phoenix Historic Preservation Office — has carefully restored this once-neglected stucco building and carefully restored and adapted it into an industrial modern office space that houses its new office.

The tour, hosted by Dudley Ventures founder Jim Howard, highlighted the extensive work that was done to restore the building and convert it to a functioning office space. In addition, we were shown a special feature in the firm’s break room: a large mural created by painter Joseph Perez, an artist from Neighborhood Ministries. The mural represents rebirth and revitalization that fits well with Dudley Ventures’ community revitalization mission.

Mayor Gordon joined the group at the Arizona Hardware building. During his remarks, the mayor emphasized the importance of preserving our authenticity and diversity through the reuse of historic buildings next to new developments like CityScape. He also reiterated how the projects highlighted during the tour are contributing to Phoenix’s urban revitalization.

All in all, the Downtown Phoenix Historic Building & Warehouse Tour was a great experience that highlighted a few of the many hidden assets of Downtown Phoenix. Not only do projects such as these give Phoenicians authentic places to work, live and play in the heart of Downtown, but they also support Phoenix’s rich architectural history and heritage — necessary ingredients in any great city.