Kickin’ it Old School at the South Central Gym 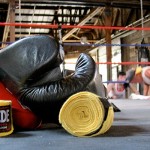 A whistle blows. Teammates pant. The musty gym smell mixes with an odor of sweat, exertion, and intensity.

It feels like an extreme practice for some varsity sport. But in a 1928 warehouse located in Downtown Phoenix’s Warehouse District, the South Central Gym whips an assorted group of adults into shape—old-school style.

The run-down brick building appears abandoned on a quiet Sunday morning. Passing by, one wouldn’t give it a second glance before deciding the warehouse probably shut down years ago. But inside The Duce, a gym/restaurant/bar/retail store, the surprisingly hip urban atmosphere pairs with a unique collection of workout equipment for the ultimate fitness haven. A boxing ring pushed toward the back of the building stands about four feet off the ground, and two punching bags hang dauntingly nearby.

Not a single treadmill or elliptical.

Dumbbells, workout benches, and an exercise ball line the back wall, but there’s no digital screens or beeping instruments in sight. A rusted bell hangs close to the ring, retired from its duty of starting and ending boxing matches.

“Knock me out, knock me out,” a trainer yells from the ring. He holds a hand up, protected by red padding, and blocks the jab of his female opponent.

Luis Machado, a mixed martial arts trainer, teaches people of all ages, shapes and sizes at South Central Gym. He trains amateurs and real MMA fighters, and he said his students “train till they pass out.”

“Straight up, like this,” Machado tells the woman, showing her how to swing the over-sized black gloves with impressive force. The trainer’s knowledge of boxing techniques and his motivational coaching add to the gym’s down-to-business atmosphere.

But the head coach, Steve Rosenstein, really sets the mood upon entering the South Central Gym.

He blows his whistle to start class. “Let’s go!”

The Gritty and the Pretty

As a former wrestler for the University of Arizona, Rosenstein knows his stuff when it comes to athletic training. He opened South Central Gym back in the fall of 2010, which is when he and his wife first started their multi-purpose business at The Duce. His vision involved an old-school gym where he could get people back to basics with their workout routines. So he bought a boxing ring on Craigslist, and his idea for the South Central Gym fell into place.

“This is like the antithesis of a Gold’s Gym or one of those elite health clubs,” Rosenstein said. “The setting here creates a whole different kind of atmosphere. You’re in an old warehouse, working out in a retro boxing ring…and there’s no technology here except for my iPod.”

Rosenstein decided the boxing ring was a necessity because “boxing is about as old-school as you can get.” He said the ring has become somewhat famous, and its uses have varied from concerts to weddings to a stage for the former Phoenix mayor, Phil Gordon.

Along with the ring, Rosenstein threw in some chin-up bars, dip bars, jump ropes and even old tires to keep the gym simple, yet challenging.

“This place is designed to make us fit,” he said. “But it also takes us back to a simpler time that we all kind of miss anyway.”

We all ‘Need a Minute’

When class is in session, Rosenstein’s students pant, sweat, and push themselves beyond their usual limits to reach whatever fitness goals they may have. The coach added that he keeps it fun, but he also wants his class focused and motivated. “Lisa! What are you doing over there?!” Rosenstein yells during a push-up drill.

“I just need a minute, I’ll join you,” replies Lisa Khan, 50, who sat down for a short breather.

“Oh, jeez,” she sighs, jumping back into the drill.

Khan, an attorney from Arcadia, said she has been coming to the South Central Gym for about a year, and she added that this type of exercise “keeps you young.”

“The space is absolutely fantastic,” she said. “It’s great for cross-training and reaching your fitness goals, and it’s just a great place to sweat in.”

The sweat is certainly not in short supply for anyone working out at the South Central Gym. All of the members work hard and constantly cheer each other on, providing an ideal environment for getting fit and reaching aspirations.

“I don’t want to say this place changed lives,” Rosenstein said. “But it definitely changed some lifestyles.”