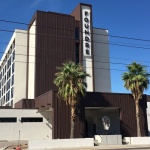 Capitalizing on the vibrancy of the nearby Roosevelt Row, the FOUND:RE Hotel opened this week in the former Lexington Hotel building after an extensive $25 million renovation. The FOUND:RE is designed to be an innovative hotel celebrating the arts and culture of the area. Some of the art is also interactive, with a projector activated by a sensor painting silhouettes on the floor in the lobby as guests walk into its path. FOUND: RE even has its own cultural curator, Michael Oleskow, who has partnered with 26 local artists whose art is all for sale on the hotel’s website, Calamur says. Not only will the hotel promote sales of local artwork, but it employs about 150 people, he says.

The hotel isn’t limiting itself to the visual arts, but wants to include all forms, from culinary arts at its restaurant Match Cuisine & Cocktails led by Chef Akos Szabo, to offering fashion shows, music, and poetry readings.

Emblazoned on the side of the hotel facing Central Avenue is the hotel’s mission: Find yourself.

“Find yourself is our mission at the end of the day. What that speaks to is a sense of discovery,” Calamur explains. “It’s a feeling of euphoria. When you discover a new person. When you discover new food, new music. … It’s a good sense.”

Calamur notes the restaurant will offer several Light Rail Express menu items to allow guests to eat a quick business breakfast or lunch within 30 minutes. A $2 discount will be given to those who display a light rail ticket. FOUND: RE will also have several multi-purpose rooms available for rental for weddings, board meetings or other special occasions. For example, a studio space off the pool area currently features the work of Travis Ivey that he has titled “Streetscape.” Studio and Gallery spaces will feature rotating shows throughout the year.

The 8-story hotel offers 104 guest rooms, each numbered with a custom piece of artwork by Cheryle Marine. Complimentary wi-fi is included in rooms and all public spaces. The pool area includes a beach scene mural by Lucretia Torva and an herb garden. Depending on the season, room rates range from $269 for a standard room to $500 for a suite.

Whimsical touches can be seen throughout the hotel. For instance, a window in the restroom looks out into the hallway, but it’s a one-way mirror outside the unisex bathrooms so you can’t see inside. Doors inside the bathrooms and guest rooms slide like barn doors. About 80 percent of the light fixtures and furniture was done by local craftspeople, Calamur notes. Even the phones offer unusual options in addition to the standard choices: Touch a button with a question mark on it and be connected to a mystery selection, which could include a joke of the day, a horoscope or a riddle. Android tablets in the rooms allow guests to learn more about the artwork or place in-room orders. Bluetooth speakers in rooms that can be hooked up to smartphones offer good sound quality.

“We don’t want to be the usual hotel and restaurant,” explains Calamur, adding that the hotel’s other values include kindness, community, and wonder. The hotel is a collaboration between the local developer Habitat Metro, which also developed the nearby high-rise condominium project Portland on the Park, and BOND Partners. The condominium developers wanted a more high-end hotel in the area to coincide with its project, Calamur explains. It will be an independent hotel, the first in the brand, managed by Urban Quarters Hospitality, he adds.

Portland on the Park owners will be invited to join the Portland Club, giving friends and family member discounts and first previews options or invites to art shows and other programs, such as holiday dinner specials, he says.

FOUND: RE Phoenix is an affiliate of Worldhotels, a leading global group for independent, upscale hotels with nearly 500 hotels in 250 destinations and 65 countries worldwide. Reservations can be made at www.foundrehotels.com or 602-875-8000.