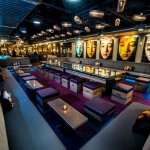 Located in downtown Phoenix, on Central Ave. and Portland St., MATCH: Restaurant & Cocktails is asking the public to bring cases of water to the wood-fired kitchen, where donors will receive a buy-one-get-one-free certificate for every case of water they drop off. Each coupon is good for lunch sandwiches or salads and dinner entrees at the downtown neighborhood restaurant.

“It’s critical for us to help hydrate our neighbors this summer and we really look forward to making a strong impact with this water drive,” said FOUND:RE Phoenix General Manager Vittal Calamur.

All water donations will go directly to Phoenix Rescue Mission to support its Code:Red Street Outreach program, which is a central part of the heat relief campaign, delivering water and other heat relief items to those on the streets who need it most. Since the Mission first launched Code:Red in 2013, heat-related deaths among the homeless have continued on a downward trend, according to the latest data from Maricopa County. “Every year our deadly summer heat claims the lives of too many people on our streets, and it’s vital that we all come together to fight this epidemic of homelessness,” said Phoenix Rescue Mission President and CEO Jay Cory. “Without the support of the public and local businesses like MATCH: Restaurant & Cocktails, we would not be able to continue our efforts in making our community a better place for everyone.”

The 5th Annual Code:Red campaign began on May 1 and runs through August 31. Partnering with several businesses and municipalities, including the cities of Phoenix, Peoria and Glendale, the nonprofit hopes to collect and distribute at least 1 million bottles of water during the campaign to support the needs within the community. Other items needed include white socks, toiletries, hats, light-colored T-shirts, sunglasses, sunscreen, chapstick and more.