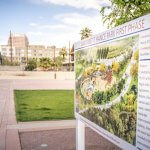 The Margaret T. Hance Park Revitalization Project is a public-private partnership led by the Hance Park Partner Coalition, consisting of the City of Phoenix Parks and Recreation Department, Phoenix Community Alliance and Hance Park Conservancy. Funding for the project, estimated at $100 million, will come from public and private sources. A fundraising campaign is being led by the Phoenix Community Alliance and Hance Park Conservancy. The following is the Hance Park Newsletter for April 2020. Subscribe to the newsletter on phoenix.gov.

The Hance Park Revitalization Project moved into the first phase of construction during the week of March 16. The initial focus of this phase is to repair Interstate-10 tunnel joints underneath the west side of the park. That work is being done by contractor Haydon Building Corp in coordination with the Arizona Department of Transportation (ADOT). The joint repairs will be done prior to construction of the “Fiesta Bowl Play at Hance Park” play area and surrounding infrastructure and landscape. The building of the play area will begin later this spring and be completed by the end of the year. Click to enlarge. Rendering by HargreavesJones, courtesy of City of Phoenix.

With temporary fencing in place and construction equipment in use, the walking paths on the north and south edge of the west side of the park are closed. This closure is expected to last until December. Due to that restriction, those wishing to connect through the park from west to east will need to use the sidewalk along Culver St. on the park’s north edge, and then access the stairs or ramp near the Central Ave. bridge. Additionally, area lighting within the footprint of the project will be affected, but lighting outside the construction zone will remain as is. As was shared in previous newsletters and other communication, work in the park during the coming weeks also will include removal and salvage of select trees. This removal is temporary. When completed, the entire park will boast a total of more than 1,000 trees – approximately double the existing amount.

As part of phase one demolition work, the flag poles that recognize the Phoenix Sisters Cities initiative were removed. The flag poles will not be part of the redesigned park. As such, City of Phoenix staff and project design team HargreavesJones is working with Phoenix Sister Cities representatives to develop a new way to represent this partnership in the park. The community is reminded that this is a complex project and construction timelines and park user access is subject to change, but the Hance Park Partner Coalition is committed to maintaining consistent communication. The easiest way to follow project updates is by visiting the Hance Park Revitalization Project website.

Managing the Spread of COVID-19

Being outdoors is important for health and wellness, and the Phoenix Parks and Recreation Department encourages residents to get outside, get exercise and practice responsible physical distancing while exploring all that the city’s parks have to offer. City parks are open, but as the department continues to work with the community to manage the spread of COVID-19/coronavirus, the following park amenities are temporarily closed: restrooms, playgrounds, basketball and volleyball courts, fitness equipment, ramadas, picnic tables and sports complexes. All large gatherings and events on city park property have been postponed as well. Guidelines about physical distancing when enjoying outdoor recreation can be found at Phoenix.gov/Parks. Additionally, contractors/subcontractors working on the Hance Park Revitalization Project are following Centers for Disease Control (CDC) guidelines and working in coordination with the Office of the City Engineer to maintain a worksite-specific safety plan related to COVID-19.

Margaret T. Hance Park’s revitalization is the perfect complement to the visible progress throughout Downtown. The vision of the Park as a vibrant community gathering place marking the northern boundary of the Downtown area is central to the story. But the sheer numbers of new residents and economic impact of the Park and surrounding Downtown development also are crucial to understanding the Park’s key role. Click to enlarge. Rendering by HargreavesJones, courtesy of City of Phoenix.

Here are a few other statistics outlining the growth in the Downtown RDA surrounding Hance Park: Hance Park already is an oasis in our community. The revitalized Park will be even more critical as Downtown becomes a denser urban region.

For more information about the Phoenix Community Alliance (PCA), visit our website or contact us by e-mail via info@phoenixcommunityalliance.com.

The Hance Park Conservancy (HPC) was established in 2010. It is a community-based, 501(c)(3) non-profit organization that is the catalyst for a new chapter of public space renewal in Phoenix.

For information about the Hance Park Conservancy, visit our website.

More than 24,000 people were in Hance Park during the weekend of March 6 to 8 to celebrate music, art and food at the M3F music festival. It was the seventh straight year that the park served as the venue for this event. All proceeds from the festival benefit local nonprofit organizations, and after this year’s event M3F donated more than $600,000. The list of organizations to be supported include the Phoenix Children’s Hospital Music Therapy Program, Habitat for Humanity – Northern Arizona Chapter, Teach for America, and the Leukemia and Lymphoma Society. A portion of ticket sales proceeds will also help fund trees to be planted in parks citywide. This monthly newsletter, first published in December 2019, is produced by the Hance Park Partner Coalition. The Coalition encourages everyone to share this newsletter with family, friends and the organizations in which they are involved to help spread information and awareness about the project. Those who wish to receive it by e-mail can subscribe by visiting the Hance Park Revitalization Project website, which is also the best place to follow the latest updates about the project and park. The newsletter can also be viewed and downloaded via that website. Questions and comments about the project can be directed to Hance.Park@Phoenix.gov.