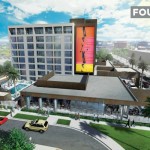 The concept’s identity is no longer a secret.  The former Lexington Hotel located on the northwest corner of West Portland Street and North Central Avenue, is being transformed into the FOUND:RE Phoenix, a one-of-a-kind life style hotel experience with details, designs, public spaces and amenities inspired by contemporary art, culture, fashion and music. The 104-room hotel, managed by Urban Quarters Hospitality, will enhance the city’s arts offerings with an impressive collection of contemporary art and creative guest programming woven into the entire guest experience for visitors and locals to enjoy. The FOUND:RE Phoenix is being developed by Habitat Metro, the developers of the Portland Place condominiums and the adjacent Portland on the Park condominiums slated for a fall 2016 opening, and BOND Partners, developers of a collection of unique, lifestyle hotels and resorts. “The FOUND:RE completes our vision of transforming Portland Street back into the gem of Downtown Phoenix that it once was,” said Tim Sprague, principal of Habitat Metro.  “We reached out to Bond Partners for their expertise to assist in creating something special for this unique location next to Hance Park and the Light Rail in the Roosevelt Historic Neighborhood.”

The modern hotel will contain a dynamic art component led by Cultural Curator Michael Oleskow, who will be sourcing contemporary art of various mediums by local artists that will inspire creative guest experiences. The collection is intended to complement the décor and guest programming, including an on-site art gallery and exterior avant-garde art display. The FOUND:RE will be partnering with prolific design partners to create an industrial, raw design and aesthetic throughout, with furnishings and touches such as concrete floors, exposed ceilings, and floating beds. The hotel will also have an on-site restaurant that will offer a creative menu of sharable plates focusing on eclectic, globally-inspired street food.

“We‘re thrilled to be part of this project that will be a stylish gathering place for locals and Phoenix visitors to enjoy and become inspired,” said Vittal Calamur, general manager. “The buzz and excitement around the completion of The FOUND:RE has been building for the past few years, and we’re thrilled to see it come to fruition. With plans to embrace the neighboring art galleries and museums, The FOUND:RE will bring a fresh and edgy hotel concept to Phoenix, showcasing an entire collection of local art and curated experiences. We are designing a space for locals and travelers to find themselves, embrace curiosity and ignite discovery.”

The FOUND:RE will be another layer of creativity in Phoenix’s growing art community, embracing its urban location within the thriving arts district of Phoenix, with nearby art galleries, the Phoenix Art Museum and creative pop-ups. Located within the Central Arts District, in close proximity to Roosevelt Row, across the street from the Roosevelt Valley Metro light rail station and Portland Street Park, the hotel will be a welcomed addition to the neighborhood offering great social spaces and new dining experiences.

With construction underway, The FOUND:RE Phoenix is slated to be unveiled in spring 2016. For more information, please visit www.foundrehotels.com. For regular updates, please follow us on social media, Facebook: FOUND:RE Phoenix, Twitter and Instagram: @foundrephx.