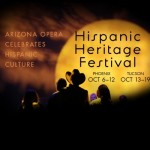 Diversity with local relevance is a prime goal for nonprofit arts organizations, and Arizona Opera hopes to pique interest in its forthcoming mariachi opera and expand multicultural outreach with this week’s Hispanic Heritage Festival.

“The whole purpose of the Festival,” says Arizona Opera Education Manager Joshua Borths, “is to bring together the Hispanic audiences who haven’t necessarily been to the opera before, and expose our opera audiences to this incredible world of mariachi music and cultural richness.” The Festival begins with Monday’s panel discussion on immigration and the arts at Arizona Opera Center, kicking off a week of events leading up to the weekend’s season-opening performances of Cruzar la Cara de la Luna (To Cross the Face of the Moon). Along with moderator Daniel Buckley — a composer, journalist, historian, documentary filmmaker, photographer, and Governor’s Arts Award winner — the roster of illustrious participants includes playwright, journalist, and policy strategist James Garcia and Arizona State University Vice Provost and Professor of History Eduardo Pagán. The third member of the panel is Shoshana Tancer, a highly respected immigration attorney and professor emeritus at Thunderbird School of Global Management. Tancer’s background comprises extensive work in Latin America as well as longtime advocacy for the arts.

“It’s kind of funny because someone said, ‘Yeah, a member of your Opera board should be on that panel,’” says Borths. “I started talking to her [Tancer] and learning more about her life … understanding arts, and understanding all of the complex issues that surround immigration.” He adds, “We’re lucky to have her involved. It’s a really interesting, diverse group of people.”

Tuesday night offers a lecture-demonstration on mariachi history and conventions by retired ASU musicology professor Richard Haefer and his ensemble Mariachi Corazon de Phoenix. The Opera Center transforms itself into a mercado for the Cultural Exchange on October 8, becoming a marketplace. “We’re going to have food trucks, throw open the garage doors,” says Borths. “Mariachi is booked from 6-9, local arts and crafts, and even a guest appearance by Alan Ponce, the runner-up on La Voz, The Voice in Mexico.” Hundreds of schoolchildren will converge on Symphony Hall Thursday evening to attend the mariachi opera’s final dress rehearsal on Student Night, and Saturday afternoon the Festival concludes its Phoenix events with a showcase of Hispanic art at the Opera Center — “We’ll have some fine art projects and we’ll be showing some Hispanic films,” explains Borths. Opera-goers will also find local mariachi groups playing outside Symphony Hall before each performance, along with the option of informal pre- and post-show lectures.

The Festival’s centerpiece, Cruzar la Cara de la Luna, premiered at Houston Grand Opera in 2010 and continued on to the venerable Théâtre du Châtelet of Paris. The opera was created by director and writer Leonard Foglia and José “Pepe” Martínez, who served as music director for Mariachi Vargas de Tecalitlán from 1975 until his retirement earlier this year. The music reflects Martínez’s signature of rapid violin ricochets and the mariachi styles of ranchera and boleros. Martínez was also influenced by his appreciation for Beethoven and for the 20th-century classical Mexican composer José Pablo Moncayo, who wrote the famously rhythmic Huapango and the opera La mulata de Córdoba.

Martínez and Foglia wove 15 songs into a brisk, emotionally potent 80-minute opera without intermission, using flashbacks to tell a multi-generational story of immigration between Mexico and America. They also use the metaphor of monarch butterfly migration, says Mariachi Vargas violinist José “Pepe” Martínez Perez, Jr., the composer’s son. Speaking through interpreter and assistant manager Ivan Leony, he continues, “They travel for a better situation, a better place, like the butterflies … a lot of them die. That’s like the immigrants … some of them make it; some of them don’t.” Leony adds, “Of course our group has never been — and probably will never be — political. We do it because of the music.” Arizona Opera’s production of Cruzar la Cara de la Luna features the original cast including Mariachi Vargas, which was founded in 1898 and gained even wider recognition by releasing a popular album with Linda Ronstadt — it’s one of more than 200 recordings from the venerable Mexico City-based ensemble.

“The piece is scored for mariachi and vocalists,” says Arizona Opera General Director Ryan Taylor, “so the band appears onstage and serves as orchestra and chorus, and then the vocalists and dance troupe tell the story in operatic fashion in front of them, so they’re all onstage all the time.”

“There are opera singers who have spent time studying the technique of mariachi vocalists because they have such stamina and such power in their delivery,” Taylor continues, “and there are also mariachi vocalists who have looked to the way that the original musical theater and opera singers performed … without amplification.” He adds, “They’ve really sort of fed off of one another in their development in a cool kind of way.” Pepe Jr. will lead the upcoming performances somewhat like a concertmaster leading a chamber orchestra, with the trumpets, violins, and rhythm section of Mariachi Vargas arrayed across the back of the stage. Dancers perform downstage with the soloists, including classically trained baritones Octavio Moreno and Brian Shircliffe, mezzo-soprano Cecilia Duarte, soprano Brittany Wheeler, and tenor David Guzman. Spare, minimal sets and lighting suggest vast desert landscapes interspersed with a few indoor scenes.

“Since of course it talks about the undocumented immigrants crossing over,” says Pepe Jr., “it’s very touching and you see a lot of people teary and sad as they leave the performance hall with an open heart, but also fascinated with how the story of an immigrant family could be such a good opera.”