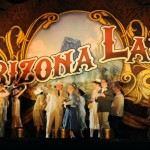 Yippee-ai-oh-kai-yay! Arizona Opera is pulling out all the stops with their first production of the season, “Arizona Lady.” The story behind the creation of this U.S. premiere of Emmerich Kálmán‘s 1953 “love letter to the Southwest” embodies the zesty exuberance, artistic innovation, and overall creative joy that has come crackling out of the Arizona Opera company in the last few years through their Arizona Bold initiative. Prior to coming to Arizona, while Arizona Opera’s General Director Ryan Taylor was with Wolf Trap Opera in Virginia, he was a riveted audience member for a remarkable production called “Road Trip” by the multi-talented Steven Blier. The conceit of the program included a road map on which Blier had dropped dots to mark the journey. Each dot was represented by music that related to that area of the country in some way. For the Southwestern dot, Blier had chosen the opening chorus of a little known opera called “Arizona Lady.”  The composer, Emmerich Kálmán, was a Hungarian composer who’d fled Hitler’s Europe and spent nearly a decade in the forties in Hollywood writing operettas and movie scores. During his time in California he made several trips to Arizona, and upon his return to Europe after the war his memories of Arizona inspired him to write “Arizona Lady.”

Taylor was knocked out by what he heard. “I was sitting in the audience that night and I just thought this is the coolest thing I’ve ever heard. It sounds like a Hollywood movie score that would be for a Busby Berkeley musical or something where you’d see Esther Williams swimming around with choreographed moves in the pool. It’s just amazing music. And it was funny because it was in German, but there were phrases like ‘Yippee-kai-ay,’ ‘ride cowboy’ and snippets of English that Kálmán had thrown into the libretto. It was campy and fun and upbeat and tuneful, and just so exciting. The audience was enraptured by the piece.”

After hearing the piece he was inspired to copy the score and tucked it away. A few years later he came to Arizona Opera and while moving into his new house came across the box with his xeroxed copy of the opera. Taylor shared it with Allen Perriello, the Arizona Opera studio director, who loved it as well. When the new Arizona Opera Center opened in the fall of 2013, they had the Marion Roose Pullin Studio Artists sing the opening chorus of “Arizona Lady” for the celebration. The audience was very intrigued. “Everyone there was like, ‘this is the funniest song we’ve every heard AND it’s in German AND they’re singing about Arizona’….There was a lot of buzz in the audience that night among people who were hearing this for the first time.”  What was this crazy wonderful music? Could it be the new state song?

The music percolated in the back of his mind and an idea was born. He knew that the company wanted to introduce new repertoire to the Arizona audience, but he also knew that they had not really trained their audience to understand that everything the company does is going to be of a certain quality and they should want to see everything, even unfamiliar works, because they know that they will be transported. “We knew we needed to introduce new repertoire,” said Taylor, “but it couldn’t be just any new repertoire. So we devised Arizona Bold as a method for us to identify a couple of shows each year that would be geared toward people who live in Arizona.”

As a part of Arizona Bold, they planned to open the 2015-16 season with “Arizona Lady” and began putting together a creative team with conductor Kathy Kelly and stage director Matthew Ozawa to refurbish the opera for a contemporary Arizona audience. The process included trimming extraneous story lines, translating it from the original German into English and Spanish (with the help of Arizona State Poet Laureate Alberto Rios), creating dynamic set design and costumes, and pulling together the perfect cast.

Taylor describes the opera as a love letter to Arizona filled with a myriad of western details, like roping tricks, horse races, a ranchera song, and a barbershop quartet from 1920’s when this would have taken place.  “It all completely fits; it sounds like something you would have heard in Tucson at this time.” He adds “The stage direction is wacky, almost like a circus. It also includes five or six styles of dance from vaudeville and square dance, to dream ballet. And on top of that it has really incredible singing with gorgeous melodies. By the time you leave the theater there will be stuff stuck in your head that you can’t get out. That you just love…. Crazy cool stuff.”

Clearly, this is a not to be missed chance to experience a uniquely Arizona story by our first-rate Arizona Opera.