First Friday for a Song 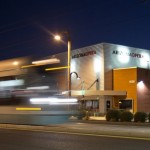 After years of dividing staff time and resources between separate offices and rehearsal space, Arizona Opera has at last consolidated most of its operations in one location, thanks to the capital culture bond approved by Phoenix residents in 2006. The company’s new home, formerly a space for office furniture belonging to Walsh Bros., is directly across the street from the Phoenix Art Museum and near the light rail on the northwest corner of Central and McDowell. Singers and administrators alike are enjoying the novelty of in-house rehearsals at Arizona Opera’s new center, says General Director Ryan Taylor. “Now we’re all under one roof,” he explains. “We’ve got our costume shop…our wig and makeup department…marketing…development…” Taylor pauses and smiles. “Everyone who needs to know exactly what’s going on with the art form can just wander in and see what’s happening that day.”

This weekend offers everyone that rare behind-the-scenes opportunity with plenty of great music, beginning at 6 p.m. this evening and continuing through Community Day celebrations on Saturday, October 5. First Friday options include a professional makeup demonstration in preparation for the Zombie Walk, tours, food trucks ranging from Short Leash Hot Dogs to Paradise Melts to Paletas Betty, and rehearsals of H.M.S. Pinafore, which opens Arizona Opera’s season.

Be sure to grab a spot for tonight’s performances of Craigslistlieder, written in the spirit of classical German art songs but using mature-audience-only lyrics from online ads with tongue tucked firmly in cheek. This offbeat 2006 work for voice and piano was composed by Gabriel Kahane, son of pianist/conductor Jeffrey Kahane, and includes titles like “You Looked Sexy,” “Neurotic and Lonely,” “For Trade,” and “Half A Box of Condoms” performed by baritone Chad Sloan.

Seating is somewhat limited in the new center, since the flexible performance area seats only 235. This allows greater intimacy between audience and performers, says Taylor, hopefully eliminating not only physical distance but also the stereotypical formality of opera. “I think the other thing that I like is just the sunlight,” Taylor adds with a laugh. “Here it’s just a joy, and the acoustic is so good in this new hall; we’re rehearsing in a space that…really is an integral [part] of that downtown corridor in the center of the…arts district.” Saturday begins with an 11AM presentation from Steinway & Sons, more tours and food trucks, and ongoing performances by members of the Phoenix Youth Symphony, the Arizona School for the Arts Middle School Chorus, and six singers from the Marion Roose Pullin Opera Studio. The evening brings Opératif, a $25 behind-the-scenes preview with Taylor and a glass of wine at the final rehearsal of Pinafore.

General Director Taylor enjoys casting young artists appropriate to the age of their roles, and rising star David Portillo is a fine example in the role of Ralph Rackstraw, the hero of the piece. Portillo is a Mexican-American tenor from Texas, still in his mid-30s but already boasting appearances with Lyric Opera of Chicago and Washington National Opera, along with performances in Switzerland, Japan, France, Italy, and Luxembourg. He previously sang Beethoven’s ninth symphony with The Phoenix Symphony, and he’s been praised by Opera News as “a sharp performer” with a “warm, sexy lyric tenor.” Portillo also delivers a Spanish-language recital on Arizona Opera’s voiceLab series at the Musical Instrument Museum on October 27.

Arizona Opera stays with a maritime theme by following Pinafore with Richard Wagner’s The Flying Dutchman in November. Shorter than most of Wagner’s famous Ring operas, Dutchman is a thoroughly enjoyable spine-tingling romance soaked with plenty of supernatural forces and the composer’s trademark musical sound effects, from spinning wheels to storms. Soprano Lori Phillips sings the heroine role of Senta, in which she debuted at the Metropolitan Opera. Dutchman’s title role showcases another Metropolitan Opera favorite: baritone Mark Delavan, who grew up in Phoenix and earned a degree in art at Grand Canyon College (now Grand Canyon University) before studying music in Oklahoma. Delavan’s parents were both major figures in the Valley’s choral music scene. Over-the-top reviews for the singer — especially in performances of Verdi, Wagner, and Puccini — include praise for his “half-divine, half-human voice” (and really, who could resist that quote). Intriguingly, Delavan crafts knives as a hobby.