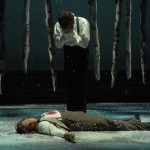 Two remarkably successful “Million Dollar May” fundraising projects not only brought in income but also raised the company’s international profile, encouraging participation from dozens of new donors across all 50 states, Canada, Austria and Japan along with AZ Opera staff, supporting organizations, and trustees. This response led to even better news: although the new campaign was only recently announced, it’s already raised more than $2 million. As for programming, Arizona Bold includes two canon-expanding operas each season, encouraging community engagement with each production and also refreshing the tired palates of longtime operagoers with regionally appropriate fare in Phoenix and Tucson.

Plans include Florencia en el Amazonas by Mexican composer Daniel Catán, Frida & Diego by Gabriela Lena Frank and Nilo Cruz, the comic operetta Arizona Lady by Emmerich Kálmán, and the long-awaited world premiere of Riders of the Purple Sage, written by Arizona’s Craig Bohmler with Steven Mark Kohn and based on the eponymous novel by Zane Grey.

Several upcoming operas resonate with current issues — take for example Dead Man Walking by Jake Heggie and Terrence McNally, which focuses on capital punishment, or the wartime story of Silent Night by Mark Campbell and Kevin Puts (who wrote a commissioned work for The Phoenix Symphony and Hermann Michael in 2001 titled Inspiring Beethoven). The opera’s Arizona performances feature the original cast including Mariachi Vargas de Tecalitlán, a 116-year-old ensemble. Cruzar la Cara de la Luna was written as a collaboration between director and writer Leonard Foglia and José “Pepe” Martínez, who served as music director for Mariachi Vargas from 1975 until his retirement earlier this year. Expect songs in Spanish and English with English supertitles projected above the stage, and a multi-generational story of immigration told by dancers and soloists through flashbacks.

Taylor explains, “The Hispanic population here in Arizona is such an integral part of our society that…we really wanted to legitimize the piece and call attention to its validity in the repertoire…so we decided to launch the season with it — we felt like it was a great new way to be a little bold.”

Those who love sweeping Romantic orchestral music will find full satisfaction in November’s emotionally wrenching Rigoletto by Giuseppe Verdi — a classic production from Utah Opera — and the first performances of 2015: a brand new production of Peter Ilyich Tchaikovsky’s passionate Eugene Onegin, both featuring the talents of Arizona Opera’s excellent orchestra. Rigoletto’s tragic tale of a father’s struggle between love for his daughter and a quest for vengeance stars Italian-American baritone Michael Corvino in the title role. “I can tell you we chose him because he made all of us cry in his audition,” says Ryan with a laugh. “I was riveted and it was…haunting and beautiful…[he] has a certain tambour in the voice that is ideal for this kind of repertoire.”

Alexander Pushkin wrote the original story of Eugene Onegin, a sort of coming-of-age romance directed by Tara Faircloth, who was responsible for last season’s popular and engaging H.M.S. Pinafore. Taylor hopes to involve Arizona’s Eastern European residents, he says. “There’s actually a decent-size Slavic and Russian and Serbian population here…and that’s part of our goal: to start producing repertoire that matters to different sets of communities within our borders.” Costume sketch from “The Magic Flute” (by Leslie Bernstein)

Consider the intersection of multi-layered Masonic imagery and Wolfgang Amadeus Mozart’s Classical style in The Magic Flute (Die Zauberflöte) in February and March, with a new production by the Metropolitan Opera’s Dan Regazzi. The opera promises sparkling performances from Arizona Opera Marion Roose Pullin Opera Studio alumnus David Margulis in the tenor role of Tamino and a jaw-dropping Queen of the Night aria from soprano Lindsay Russell.

“If there’s operatic singing that [is] sort of superhuman, it comes in Magic Flute,” Taylor says. “You’ll hear the highest and lowest notes written for artists and regularly performed today in this piece, and it’s a fantasy fairy tale.”

The season ends with the fabled nine high Cs of Gaetano Donizetti’s lighthearted The Daughter of the Regiment (La fille du régiment), which was excellently previewed at Arizona Opera’s recent “Town Hall” presentation by tenor David Portillo. Those heart-stopping high notes will ring even more beautifully when Portillo sings them in April. “That’s the reason that you do Daughter of the Regiment, right?” says Taylor with a laugh.