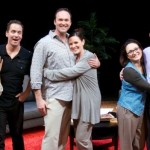 As summer moves toward autumn, don’t miss a final opportunity to catch Actors Theatre’s very funny two-play repertory before it slips away. Presented at the Helen K Mason Performing Arts Center, The Cottage by Sandy Rustin continues through August 10, while The Book Club Play by Karen Zacarías ends its run August 17.

By scheduling performances throughout June, July, and August, Producing Artistic Director Matthew Wiener deliberately bucked a common misconception about Valley audiences. “There used to be this kind of prevailing wisdom that everyone left Phoenix in the summer…that’s why no one did anything,” says Wiener. “And that’s just not true. I mean, a lot of people take vacations and holidays but they don’t go away for 12 weeks.”

“Actors Theatre is trying to actively reinvent after leaving the Herberger, which was a shock to our system,” he continues, “and I think this summer program is one way that we’re trying to stay vital and relevant and exciting and important to the community.”

According to Wiener, the strength of the company’s performances lies in strong casting. “They’re just marvelous performers,” he says. “I was actually trying to cast both shows together…the characters seemed to line up…and so I started kind of making up my fantasy football.” Wiener laughs. “It was like fantasy casting, and I pretty much got my first choice — my first draft.”

He explains, “I was really looking for actors who are very flexible, who could manage the language — because the language of both plays is pretty challenging — and people who I thought would get along well for 10 weeks.” Weiner continues, “These are very long contracts for the actors…and it was important to me that we work with all local people.” He adds with a smile, “I think I just got really, really lucky.”

“I think they’re all lovely,” says Wiener, “and they all have different moments.” He points out, “Maren, who plays Ana [in The Book Club Play] — she really has to run the gamut of emotionality. And we actually worked on that, because…you want it to be emotionally truthful, but by the same token you don’t want it to get so deep and horrifying that you can never work yourself out of it.” Wiener smiles. “Because after all they have to live happily ever after — it’s a comedy.”

The Book Club Play delves into the dynamics of a long-running book club, with plenty of shocking revelations and laughably realistic interplay. “I think it’s fun when they talk about the ‘homoerotic undertones of Moby Dick,’ [and] making fun of Twilight,” says Wiener. He explains that the play began as a more satirical, hard-hitting piece until Zacarías — the experienced, award-winning author of The Bare-chested Man, Looking for Roberto Clemente, Mariela in the Desert, The Sins of Sor Juana, and an adaptation of How the Garcia Girls Lost Their Accents — reworked it.

“I think it’s a testament to the writing, and the fact that it’s been rewritten several times,” he says. “Karen is a very careful writer — the language is very specific. And I just have an amazing ‘A’ team up there.”

The Cottage, on the other hand, is pure farce written by actress Sandy Rustin, who created the Off-Broadway sketch comedy musical Rated P (for parenthood). “It has some of the style of Nöel Coward,” says Wiener. “It’s informed by that kind of English aristocracy or English wit.” He adds, “It’s not an earth-shattering piece of theater, but it’s pretty damn funny for an hour and a half.” “Right now there’s a fair amount of dialogue in the theater industry about the lack of women’s plays being produced,” Wiener continues, “and it’s something odd going on that we’re so far away from parity. But Actors Theatre has traditionally done a lot of plays by women.” He says with a laugh, “Maybe there’s just something about the voices that I enjoy — I grew up in a house filled with women; I live in house filled with women.”