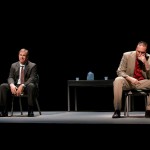 “Nothing has come easy at all,” says actor Joseph Kremer flatly. “This was probably the most challenging show I’ve ever done. There was not one bit of it that was easy — not one.”

“One of the biggest challenges is trying to make this character likeable,” adds Kremer, “because you don’t really want to like him.” The two-man play packs potent emotion, plenty of action, a cataclysmic mistake, and morally challenged characters into 95 minutes on a spartan set. An intermission added for this production doesn’t break the tension, he says. “It doesn’t take you out of the show at all…you pop right back into it because you want to know what’s going on. It starts boiling up right when you get back, too.” Kremer explains that the play is uniquely split between each cop giving his side of the story. “The play is divided into six sections…it’s definitely two separate parts in many ways…with scenes that we do together interwoven.” For example, he says, “The whole number two section I do on my own — he’s not even in it. He [Haines] faces upstage the whole time.”

“That’s something that the playwright did really well,” Kremer elaborates. “He juxtaposed scenes…to create that energy coming back…it just goes like crazy. And you know, every cop show has to have a car chase in it, and this…has one, believe it or not — it’s just me and him onstage, but there is a car chase in it.” Although some audience members have commented on the play’s often harsh language, including frequent f-bombs, Kremer believes that the verbiage is anything but gratuitous. “I’m the one who has all that language,” he points out. “The other guy doesn’t…and you’ll have to figure out why.”

Kremer adds, “The guy that wrote it…he knows what he’s doing — it’s pretty authentic.” He laughs. “I don’t know how many people I’ve had come up to me after the last three shows that we did, and they were like, ‘You know, I’ve worked for Chicago cops before, and I’ve gotta tell you: you guys nailed it —  not only the way they talk, but the language they use…the playwright nailed it, too.’”

A Chicago resident, author Huff boasts writing and production credits on the AMC award-winning television series Mad Men and involvement with Netflix’s House of Cards. He’s developing work for SyFy and HBO, and his other plays include The Bird and Mr. Banks, Dog Stories, Big Lake Big City, and The Detective’s Wife, which follows A Steady Rain as the second in Huff’s trilogy about Chicago law enforcement.

A Steady Rain was critically acclaimed for its innate poetry and won several Joseph Jefferson (“Jeff”) Awards for Best New Work, Best Actor, and Best Production when it was originally mounted by Chicago Dramatists. The 2009 Broadway run starring Jackman and Daniel Craig was named second on a “top 10 plays of the year” list by TIME Magazine.

This production signals the welcome return of Phoenix’s financially troubled but highly regarded Actors Theatre, a company freshly reorganized with massive cutbacks. Performances end with the Sunday matinee on November 10.