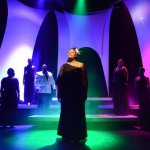 One of the most renowned musicals of the holiday season returns to Black Theatre Troupe,“Black Nativity” on December 2 – 18, 2016 at the Helen K. Mason Performing Arts Center, 1333 E. Washington St. Phoenix, AZ 85034. Last season’s sold out, legendary holiday event by Harlem Renaissance poet Langston Hughes, returns to the BTT stage in a stunning new production. “Black Nativity” is a celebration that tells the original story of the Nativity in scripture, verse, music and dance.  A joyous company of singers, actors, dancers and musicians delivers its powerful message of joy, hope, victory and liberation. Based on the Gospel of St. Luke and combined with the poetry of the legendary Langston Hughes, this song-play touches a special chord in the hearts of all at a very special time of the year. “Black Nativity” was first produced in December 1961 at New York’s 41st Street Theatre. Hughes wrote an eight-page script around a series of traditional gospel songs and upon its premiere, it became and has remained an international success.