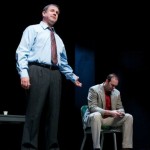 Early this morning Actors Theatre (ATOP) announced the sad news of its closure. “The simple truth is that the company is out of money,” says a letter sent to supporters.

Operations will cease and assets will be liquidated over the next couple of months. Planned productions of Annapurna, Stage Kiss and The Year of Magical Thinking are cancelled, and ATOP won’t be able to afford to refund tickets. “We’re hoping that our patrons and supporters will consider taking the expense as a tax deduction,” says the company.

Actor Theatre has teetered on the brink for the past few years, sending out several pleas for help and reorganizing. Despite drastic cost-cutting measures — ending its resident company status at the Herberger Theater Center, downsizing administration to two full-time employees, and operating on a shoestring budget — ATOP maintained its high production quality, offering powerful shows with minimal stage dressing.

Organizations including Arizona Opera, Phoenix Theatre and Black Theatre Troupe provided support and venue assistance, while a devoted audience base continued to offer encouragement to the struggling company.

In the end, it just wasn’t enough. ATOP’s board unanimously voted to close, and will work with Managing Director Erica Black and Producing Artistic Director Matthew Wiener to wrap up business.

“Among our strongest guiding principles is to pay everyone — and that includes artists and arts workers — a living wage,” said ATOP’s announcement. “…But our donor base and individual and season ticket sales were not substantial enough to provide the financial resources to support the cost structure of professional artists….”

Never afraid to present work written by less-famous playwrights, ATOP took pride in kindling thoughtful conversation and inciting visceral reactions in audiences. The company will be missed.