Off-Broadway: Look No Further Than Central and McDowell 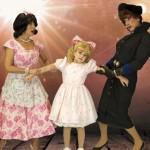 Although the new venue’s gala grand opening isn’t until October 26, Phoenix Theatre opens the doors of its 250-seat black box theater for the off-Broadway hit Ruthless! The Musical this weekend, turning the spotlight on a split-personality child star.

“Outrageous, but in a funny way” is how Phoenix Theatre Producing Artistic Director Michael Barnard describes the campy show. “It’s done with such a heightened style…it sort of parodies those great old films,” he says. “Part of it’s like the movie The Women, or like Gypsy, or…All About Eve…or Mommie Dearest…so they were smashing all of these different shows together.”

“So if you know those movies,” he continues, “…it’s really fun on that level. It’s not offensive in any way…but it’s quirky and it’s bizarre, and it’s more of a black comedy humor than straight-across humor, because…I mean, the little girl is a little demon child …she’s like The Bad Seed.”

The comically disturbing role of Tina Denmark is shared by 11-year-old Riley Glick and 12-year-old Alex Kirby, both sixth-graders at Arizona School for the Arts and past veterans of Valley Youth Theatre. Glick also landed a role in the national tour of the Broadway show Dr. Seuss’ [sic] How the Grinch Stole Christmas! The Musical, which she’ll repeat this holiday season. Invited to join the cast of Ruthless by Barnard, who knew her work from Phoenix Theatre’s production of Gypsy, Glick plays a character described as “adorably diabolical.” Is it fun to portray a monster? “Yeah, I like it a lot,” she says with a laugh. “I mean, she really has a sweet vs. evil side, and she can flip any second, so it’s…fun because you get to show a lot of different emotion while you’re playing the role.” Glick continues, “It’s kind of Gypsy, but opposite…so it’s the little girl that’s pushing it rather than the mom.”

With a concert producer and an art director for parents, Glick was accustomed to behind-the-scenes creativity when she began her career in the role of a baby spider in Charlotte’s Web at Desert Stages Theatre. “She went to a play when she was three,” explains her mother, Ronna Glick. “Yeah, and I was like, ‘I want to do that,’” says Riley. “But then my parents made me wait ‘til I was four.”

More than 30 shows later, Glick enthusiastically describes a few special effects from her role in Ruthless. “So I baton-twirl in the show, and I do a couple of tricks…that’s a lot of fun, and that’s more on the sweeter side of Tina,” she says. “But when she gets to the more evil side, I throw a knife.” In a somewhat regretful aside, she reassures me, “Not really, though.” “This is definitely an adult show,” Glick continues. “I mean, there are bad words in it.” Says Barnard, “The worst word that’s used is ‘bullsh*t’…and somebody gets called a b*tch once, and somebody gets called ‘assh*le’ once.” He pauses for a moment to consider. “I would totally say that an 11-, 12-, 13-year-old could find it funny…it’s just quirky fun…and the characters are very colorful.” Glick declares, “I promise you, when you walk out of that theater, you will not regret coming to see the show.” Barnard agrees. “If you’re looking for some laughs and…not just the same old fare…just when you think you’ve figured it out, it…keeps changing gears on you.” He concludes, “So it’s really not quite ‘til the bitter end that you know exactly what all’s happened and what transpired.”

“And I think you’ll really dig the black box,” Barnard adds. “We want to do…sort of like an off-Broadway type of material [in the new venue]…the gamut from quirky little musicals to aggressive niche musicals, comedies, or dramas; performance art, little musical revues, cabaret-style stuff…sometimes very heart-wrenching pieces that are…not for the masses…really interesting, provocative.” He cites productions like Bloody Bloody Andrew Jackson and Spring Awakening as recent examples.

“I think also half the fun or enjoyment of seeing an off-Broadway piece…is the conversation that’s stimulated by it.” Barnard continues purposefully, “And Lord knows…that’s one thing that theater can do…to provide reasons for communication and socialization in conversation, because we’re becoming so much more…isolated as we go into our telephones, into our computers…” He smiles and tips his head slightly. “It’s nice when you can put that phone down and just talk face to face…’Well, why’d you think that?’ or ‘I didn’t understand this part’…it asks you to have a reaction to it, so that you can converse about it.” He reminds me that, after 93 years, Phoenix Theatre is “one of only three professional theaters left in Phoenix presenting local productions.” Growth is vital, and audiences expand in more comfortable surroundings.

Other improvements and plans accompany the new black box: a private donor lounge, a small area set aside for group ticket patrons, an inviting 45-foot bar, and the atrium’s huge glass wall, which can be fully opened to the courtyard.

Staggered curtain & intermission times will optimize use of the expanded bathrooms. “It’s not lost on us that women are the primary purchasers of beverages and gift cart items, so if they’re standing in line they’re also not buying,” says VanVleet. “They’re the primary buyers of tickets, too.”

Theatergoers will take advantage of additional opportunities to attend performances, he says, especially expertly-staged off-Broadway-style productions. “People who buy the arts buy more arts, so we’re not in competition with any of the other companies in town,” VanVleet continues. “The data suggests that the more you go, the more you go.”