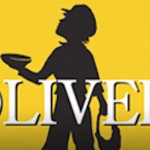 It’s unusual to see a Broadway musical enriched with a full symphony orchestra onstage behind the actors, but Phoenix Theatre’s fifth collaboration with The Phoenix Symphony promises the best of both worlds. “It’s something so unique for an audience, because you’re basically watching a symphonic concert at the same time you’re witnessing a semi-staged production, so it’s just a very cool experience that you’re not going to get anywhere else,” says Phoenix Theatre Producing Artistic Director Michael Barnard, who directs Oliver! at Symphony Hall this weekend. “You can walk out going, ‘Wow — I’ve never seen this show done that way,’ you know? …And it only happens once a year and it’s a really neat collaboration with two arts organizations working in sync with each other.” He adds, “And Tito’s been great.”

“Phoenix Theatre is a great company, and the way we’re collaborating in Symphony Hall is very unique to both institutions,” agrees Tito Muñoz, who’s wrapping up his first season as music director of The Phoenix Symphony. “The wind parts for a lot of musicals are written for a small complement, but it’s the strings that we can augment and have much more than there normally would be,” he says, anticipating a full, lush sound.

“When we do a show at Phoenix Theatre – and even on Broadway any more – pit orchestras aren’t much bigger than 14,” says Barnard, “so to be able to have 56 pieces is quite remarkable. It definitely has its challenges, but it’s really quite lovely, and you don’t get that opportunity.” He continues, “It’s just completely unaffordable other than this kind of concertized version.”

Before his appointment in Phoenix, Muñoz served as music director for France’s Opéra National de Lorraine and the Orchestre symphonique et lyrique de Nancy. “Between opera and musical theater…the only big difference is that everything is amplified,” he says. “And generally speaking, in opera the stage and the theater are vehicles for the music, so the music is the most important part of the art in opera. In musical theater that’s not necessarily the case.”

Muñoz grew up conducting musical theater throughout high school and college before playing as a violinist for Broadway shows in New York. He explains, “I think there’s a little bit more balance between the storytelling, the production itself and of course the musical numbers, but there’s a lot of underscoring dialogue, there’s a lot of scene change music.”

Although this is his first official pops concert with The Phoenix Symphony, he’s confident in the musicians’ expertise. “The orchestra does so much pops that this kind of thing is nothing new to them, actually…they’re well versed in musical theater.”

First produced in London in 1960, Oliver! was written by Lionel Bart, who based his musical on Oliver Twist by Charles Dickens. The novel was Dickens’s social commentary on the Poor Law of Victorian England, and was published in serialized form between 1837 and 1839. As a 25-year-old author Dickens drew on his own experiences working in a shoe-blacking factory as a child when his family was trapped in debtors’ prison. His misery during those years was aggravated by a bullying coworker named Bob Fagin, after whom Dickens named a villain in Oliver Twist.

Set in England, the plot follows the orphaned Oliver’s difficult and abuse-filled journey from workhouse – where we hear the famous tune “Food, Glorious Food” — to a dangerous community of pickpockets overseen by Fagin (“You’ve Got to Pick a Pocket or Two”). After a kidnapping and a murder, Oliver ultimately finds his way to better fortune in a comfortable household thanks to a kindly benefactor.

“It’s so easy with these kids,” says Muñoz. “They’re unbelievably well trained; they’re fantastic onstage.” Adds Barnard, “Hats off to their parents, and hats off to the other youth theaters that have helped prepare them for an experience like this…they’ve done a good job.”

He continues, “I think the challenge is always in making sure that you can get the best out of the kids without losing your ability to get the best out of the adults as well. Molly Lajoie has been the choreographer in particular for the kids, so she’s been a big help in that regard.” Phoenix Theatre’s technical team also features music director and rehearsal pianist Jeff Kennedy. Other challenges include timing and staging constraints. “The entire show has to come in with intermission under two hours and 15 minutes [due to the Symphony’s contract with its musicians],” explains Barnard. “Second – and probably one of the bigger challenges – is [that] we only use the apron of the stage because the symphony is occupying the bulk of the stage.” Muñoz elaborates: “We’re having the staging…in front of the proscenium, and so the orchestra’s onstage but behind all the action…so it’s a very big symphonic sound.” He says, “I’m not facing the action, so we’re doing it very much electronically – the singers have a couple of monitors so they can have a visual of my baton…and then I also have a monitor in front of me that shows the stage.”

Barnard continues, “Scenically speaking, we want to just do just fragmented or suggested locales because we want the audience to see the symphony orchestra – that’s part of the fun. So you just have to sort of think it out – necessity becomes the mother of invention. But since this is our fifth collaboration we’ve sort of learned a lot about how this might work.” He adds wistfully, “This also could be our last. I’m not really sure why, but from what I understand it’s not part of the Symphony’s calendar for next season, so this may be the swan song. I’m sad about that because I love that collaboration.”