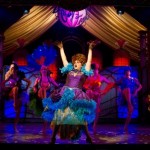 Rusty Ferracane plays the role of Georges, the owner of the musical’s eponymous St. Tropez nightclub and long-time partner to Albin, who performs as Zaza. “That’s usually my most challenging part in a musical — the dance,” Ferracane confides, shaking his head in appreciation of the inimitable Cagelles.

“I always say I’m not talented enough to be in the chorus, because they have to dance and sing and act, and…that’s too hard,” continues Ferracane, downplaying his stellar performances in shows like Man of La Mancha and I Love You, You’re Perfect, Now Change. He laughs. “Poor guys! I’m really grateful I’m not doing that — I make a very unattractive woman.”

“The Cagelles are difficult to cast,” declares director Michael Barnard. “Some men’s faces just don’t translate to a female face…and yet they’re very talented. But the point is, you’re trying to create an illusion that this is actually a female.”

“The real La Cage aux Folles takes the business of being a female illusionist quite seriously,” Barnard continues, “so they’re professionals to the nth degree…part of that is to truly try to fool the audience. After a while you begin to wonder, ‘Am I really staring at a man?’”

The actors playing Les Cagelles arrive at least 90 minutes before curtain, tucking away extra bits using gaffs between their legs. They don several pairs of stockings, chest and hip padding, tape, and layers of make-up — “plus they’re dancing in high heels,” adds Barnard with a chuckle.

Ferracane believes the appeal of female illusionists lies in what he calls the ‘wow’ factor — “you know, the glamour of a drag queen,” he explains. “You don’t have that with a woman turned into a man, because there’s no glamour there, there’s no entertainment value to that. You need the glitz.” Traditionally, men impersonating women have always had greater entertainment value onstage than women posing as men. “I just think it’s fighting the stigma,” suggests Robert Kolby Harper, who plays Albin/Zaza opposite Ferracane in a role requiring plenty of mascara and chutzpah. “Men dressing up as women…it’s a wider gap from the typical idea of what a man is.”

“Lots of men get in touch with their feminine side in different ways, but capturing the illusion of it — it’s an art form. But think about it,” Harper continues. “It’s really no fun being a man. I mean, how fabulous is that?” He shrugs. “Not very. There’s no mystique.”

Barnard suggests that the innate allure of men dressed as women stems from the appeal of the forbidden. “I think men have a stronger sense of fascination when it comes to fantasy…so I think there’s something strangely titillating and yet at the same time dangerous…mysterious and unique.” He adds, “Any time men dress up as a woman it’s always good for a laugh.” The comfortable, loving partnership of Georges and Albin in La Cage shows signs of stress when their son Jean-Michel asks his parents to disguise their relationship in order to pass muster with his future in-laws. Ferracane and Harper use the foundation of their own long-time friendship and previous acting collaborations to establish a credible on-stage rapport.

Their first show together was Hello, Dolly. “We played lovers then too,” jokes Harper, “…Cornelius and Barnaby. I mean, they’re not really lovers, but we always thought that it could have happened.” He chortles wickedly. “That was our first romance,” agrees Ferracane with a chuckle.

“I feel so comfortable with Rusty,” Harper continues. “I’ve known him about 21 or 22 years, and we’ve worked together many times…so that’s the awesome part — that kind of camaraderie.” He and Ferracane strive to give their characters believable depth.

“It’s the warmth in the relationship,” says Harper. “Ultimately you have to get two people who make the audience forget that it’s two men. I think…why this show’s done so well in the past, even back when it opened, was that…the relationship kind of sneaks up on you.”

“Because it’s fine to be gay if you’re funny and campy,” Harper adds ruefully, “but if you get real, some people can react negatively to that. If they’re real and loving and caring and honest, it’s sometimes hard for audiences.” He continues, “You sneak up on them. It’s much harder for somebody to reject someone they adore.”

“I enjoy showing family values in a different light,” says Ferracane. “It’s not…typical, but they’re definitely a strong, loving, committed family that’s supportive.” He thoroughly enjoys the show’s music, too. “Jerry Herman is so great with a lyric and…a melody, and he really tugs at your heart.” Is the show still relevant, despite the progress of equality since the play’s birth in 1973 and the creation of the musical ten years later? Harper has no doubt. “I think it’s totally an issue — otherwise gays would be allowed to marry,” he declares.

“There are many unconventional families,” Harper continues. “If you’re an adoptive parent, and you’ve given everything to a child, you know what that’s like. If you’re a stepparent, you know what it’s like to be accepted or not in that child’s life. So I think it’s bigger than just the ‘gay thing.’”

He elaborates, “I don’t know of anybody who has a normal family. What is ‘normal’? A child can be ashamed of one or both parents no matter who the parents are. And what is it like for that child to make you or your partner feel like you don’t have a place?”

“This piece holds up very well,” agrees director Barnard. “There’s not a doubt in my mind that the prejudices of this lifestyle and this world still very much exist today.”