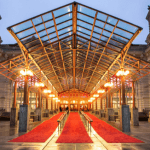 Wire*— Phoenix Theatre is proud to announce that their Producing Artistic Director Michael Barnard has been chosen as a recipient of the esteemed Ellis Island Medal of Honor!

Image courtesy of the Phoenix Theatre and the Ellis Island Honor Society.

“The Ellis Island Medals of Honor embody the spirit of America in their salute to tolerance, brotherhood, diversity and patriotism. Honorees may be native-born or naturalized, but most importantly, they are individuals who have made it their mission to share their wealth of knowledge, indomitable courage, boundless compassion, unique talents and selfless generosity with those less fortunate.”

Michael Barnard will be traveling this spring to accept this prestigious award at the Ellis Island Honor Society’s annual gala. Other 2018 Medalists include Henry Louis Gates Jr., Albert II Prince of Monaco, and Congressman Adam Schiff.

Featured image courtesy of the Phoenix Theatre and the Ellis Island Honor Society.