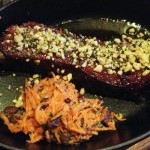 Disclosure: I am not a food writer. I only like to eat.

So, when my favorite dining companion and I had the fortunate opportunity to experience Chef Stephen Jones’ new menu at Blue Hound Kitchen & Cocktails this weekend it came as a pretty big surprise when I started writing my thoughts on the wonderful evening.

While “wonderful” may seem too general a characterization for the food readers (and writers) out there, the statement wouldn’t stand up if the food, service and ambiance didn’t each deliver to their fullest potential. Wonderment doesn’t come if the food is just OK, or if the service is inefficient, or worse, indifferent.

Mind you, this visit was not wrapped in incognito subterfuge. There were no wigs worn to disguise our appearance. They knew we were coming.

We know many people who own or work in restaurants in downtown Phoenix. Knowing the proprietor or the chef doesn’t guarantee a good experience. We’ve had plenty of awkward moments when we visit a place we love, only to have the too-casual service fall short…resulting in a feeling resembling a slightly broken heart. Sigh. Our fondness of the establishment or the people behind it bar us from expressing this “fail” out loud. Everyone has a bad night.

On this evening at Blue Hound, we cruised through the menu, the Buffalo Trace Old Fashioned limbering up our taste buds while we perused.

The new menu is described as “spring” and “simple.” One of those adjectives is more honest than the other, but more on that later.

[We purposely skipped most of the snacks section of the menu. We are *ahem* well-acquainted with these offerings. (The corner booth in the lounge has many tales to tell.) We also skipped the flat bread. This isn’t why we go to Blue Hound. There are too many stellar pizza and bread options in this town.]

The Farm cheese plate delighted (featuring a white French cheese whose name I must chase down, as I was immediately taken by its sophisticated swiss-like flavor). The asparagus salad was a chilled refresher, and the roasted cauliflower, a favorite veggie, made me wish I had ordered it a couple months ago, as it seemed a bit out of place in this spring tableau.

Three dishes became instant favorites. First, the gazpacho. Simply the best I’ve ever tasted. The chilled soup is so perfectly suited to Phoenix’s climate, it makes you wonder why every restaurant doesn’t offer it, although, they would be challenged to match this flavor.

The Crow’s Dairy Goats Milk Yelllow Corn Cake was nothing short of fantastic. Not a cornbread, this is truly a moist cake. Delicious.

Then came the arrival of the Jerk Cured Scottish Salmon. You know those dishes that seem to make time stand still? With that first bite, the world fades to the background and your soul is exposed. Served with shaved celery, apple and fennel salad, with a potato puree, this dish is the taste of spring. Given that, the Bay Scallop Ceviche had a tough act to follow. While the tangerine, fennel, heart of palm and dried lime delivered on the ceviche preparation, not to mention the dish was probably the most aesthetically pleasing of the night, the sweet/spicy tang of the drizzled sauce (interestingly not listed on the menu but described by our waiter) added a twist that didn’t quite work for my ceviche-loving taste buds. The lamb meatballs were delicious. All you gyro lovers out there, this is your mecca. The perfectly cooked meatballs were matched with a tangy red onion yogurt and accompanied by dandelion greens. The bone-in pork belly, a far cry from its cured bacon cousin, melts in your mouth upon arrival. The richness is cut here by a “peanut ghost chile gremolata.” The mix of textures was purposeful but the nuts took me away from the melting action. My companion however loved the contrast, as I suspect most would. On to desserts (yes, we were there a while…don’t judge). The Carmelized Pineapple Upside-Down Cake, is a welcome carry-over from the old menu. If you haven’t yet experienced this caramelized decadence with medjool date ice cream, you’re missing out.

But we had to try a whimsical addition: the Willy Wonka. Imagine a swirl of pulled chocolate accompanied by truffles, beet “soil” and avocado ice cream. Preferring my avocados in a good guacamole, my favorite ingredient happened to be pop rocks. Yep, those fun pops you enjoyed as a kid mix and mingle with this psychedelic dessert that leaves you wondering if a crew of Oompa Loompas are working in the kitchen. A take on the so-called simplicity of this spring menu.

This is a thinking-man’s menu. Oftentimes, you go to a restaurant to order a taste you’re looking for. This menu delivers tastes you didn’t know existed.

It made me think about the man behind the journey. Artists share something of themselves in unexpected ways, and Chef Stephen Jones exposes his thought process in his approach to this menu.

Like that proverbial hound, Chef Stephen guides you on a culinary path that only he has sniffed out. He provides little entry points along the way for those who love a good salmon or lamb, but then leads you to his discovered destination.

I don’t typically think about a menu following a dinner as much as I have following our evening at Blue Hound. Simple? Try cerebral.