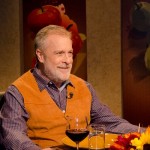 Chef Robert McGrath is known for his creative approach to regional cuisine. The James Beard Foundation award-winning chef has helmed the kitchen at such fine dining establishments as the Four Seasons Hotel, the Phoenician Resort, Roaring Fork and Renegade Canteen. Since then, throughout the restaurant industry, McGrath describes a transition of “restaurants becoming more comfortable, more approachable, with not so much high-end dining.”

McGrath’s own career has also taken a turn, now serving as TV host for Eight’s Check, Please! Arizona. In this role, McGrath is garnering new acclaim, putting a face to the food that many have dined on for over two decades. Currently in its fourth season, the two-time Emmy winning show has generated what McGrath estimates will be over 150 restaurant reviews by the end of the season, all by locals who dine at the chosen establishments. These conversations are all moderated with the safe guidance of McGrath’s quick wit.

The relationship between the restaurants and host is what helped launch Eight’s Check, Please! Arizona Festival at CityScape. The second annual event takes place this Sunday, March 30. Attendees are invited to taste the food of over 30 participating restaurants, view local artwork with Artlink Inc.’s Feast Your Eyes group art exhibition, and hear from a James Beard Award-winning panel discussion featuring chefs McGrath, Christopher Gross, and Nobuo Fukuda. These, and additional chefs, will also be cooking throughout the day on three stages.

Last year’s first Check, Please! Arizona Festival took place the last weekend in April, and McGrath says that in this second year, “the dynamic is going to be a little bit more active, a little more lively, a little more zip because it won’t be so darn hot.” With the exception of Chef Chris Bianco, who had family commitments this year, all of last year’s participating chefs are returning, a testament to the fun they all had last year.

“We all know each other very well,” McGrath says of his fellow chefs. “It’s a really nice discussion, a chance for the public to ask us about our careers and our opinions, our thoughts and ideals.”

McGrath’s transition to hosting, while seamless, was not something the chef sought out. McGrath recalls, “When they first approached me, I thought it was for a donation, a benefit to help the station. So I kept blowing them off.” It was, as he describes, his “irreverent self” that ultimately won him the spot. “It seemed so abstract. I didn’t put on an act to make it.” Of the show he didn’t know he was auditioning for, “I’ve had nothing but fun with it. It’s just been a great, great experience.”

This weekend’s event will offer festivalgoers the chance to try out for their spot as a critic on season five. While McGrath will likely be busy with his cooking demos and talks, leaving the initial audition process to the producers, he sees such a fun opportunity here, differentiating this event from the myriad of other food festivals that proliferate the Valley each weekend.

“How fun is this? You go down to the festival, you eat, drink and have a ball, the weather is great, and audition for a television program.” Describing the ideal candidate as someone who is “comfortable in your own skin, having passion, and knowing what you’re talking about,” he may as well be describing his own unlikely audition a few years ago.

As the festival takes place in CityScape, McGrath would be remiss not to detail the changes to the downtown dining scene. “I think downtown is certainly getting more vibrant and getting a lot more variety in the dining down there.” He credits the variety of people moving downtown into the apartments and condos, as well as the draw of the historic districts, which has encouraged business—and thus restaurant—growth.

With that said, he singles out a few of his fellow panelists. “I love Chris’s [Bianco] pizza, and I love Nobu’s [Nobuo at Teeter House] food. If I was doing it on a pretty regular basis, I think it’d be Mrs. White’s [Golden Rule Café], I just love her food. You just can’t tell my cardiologist that. And they’re doing some neat things at Blue Hound at the Palomar right there at CityScape.”

Between featuring local restaurants on Check, Please! Arizona, leading a food festival in the heart of downtown, and relying on local food sources, McGrath practices what he preaches.

“I think keeping our money amongst our community here, in terms of agriculture and restaurants, it’s healthy. We’re all supporting each other, all promoting each other. It’s synergy.”