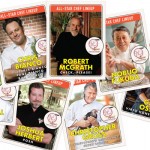 Spring in Arizona brings plenty of all-star players to the desert, but they aren’t all found on a baseball diamond. Some of them are found in the kitchens of Arizona’s best restaurants and this weekend, you’ll find an all-star lineup of the Valley’s top chefs at Eight’s Check, Please! Arizona Festival at CityScape in downtown Phoenix.

Based on Eight’s award-winning, locally-produced dining show hosted by Chef Robert McGrath, the event will feature an impressive roster of Arizona’s culinary talent, along with samples from more than 25 local restaurants.

Get the stats on the all-star team of chefs slated to appear: Fun Fact:
McGrath won the Lifetime Achievement Award from the Arizona Culinary Hall of Fame in 2013. Key Stats:
A James Beard Award-Winner in 2003 and creator of the “Best Pizza in the Country” according to publications like Bon Appétit and Vogue, as well as many celebrity aficionados. Bianco is currently on a mission to bring his organically grown Bianco DiNapoli Tomatoes to food-lovers everywhere.

Fun Fact:
Bianco recently birthed a Pizzeria Bianco in Tucson, and a daughter! Key Stats:
Fukuda is a 2007 James Beard Award Winner. Originally hailing from Tokyo, Japan, he’s been delighting Arizona foodies with innovative Japanese cuisine for the past 30 years. At Nobuo, he is famous for his omakase dining experiences, which leaves the menu selection up to the chef.

Fun Fact:
The historic Teeter House is located in the must-see Heritage Square. Key Stats:
A longtime Arizona culinary staple, who brings experience from around the world to his kitchen.

Fun Fact:
Gross has cooked for at least 3 presidents, and many other global leaders. Key Stats:
Campbell’s Crudo has received national acclaim and was named “Chef of the Year” by the Arizona Culinary Hall of Fame.

Fun Fact:
Campbell is set to debut another restaurant this Summer. Stay tuned! Key Stats:
Hebert honed his skills at the world famous Zuni Cafe and Cafe Kati in San Francisco and opened Cafe California in Japan. Upon returning to Arizona, he opened POSH, known for its “improvisational cuisine.”

Fun Fact:
Hebert is a certified sommelier, and serves on the Arizona Restaurant Association board of directors. Key Stats:
With a focus on Mediterranean cuisine, seafood and pastas, Osso’s Virtù was a James Beard Award semi-finalist for Best New Restaurant and named in the 20 “Best New Restaurants” in the U.S. by Esquire Magazine.