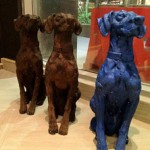 Blue Hound Kitchen and Cocktails is trying to do something right.

Padded gloves in their approach, the powers behind the new Downtown restaurant and cocktail marker inside the equally fresh Hotel Palomar have made a transparent effort to court and coddle the new neighborhood in which they are rooted. Hopefully, this transcends over time.

Unlike other recent Downtown hotel (or big-monied) projects, who landed Downtown like an alien spacecraft, there seems to be an edge of awareness for the Downtown community here that separates. A large, deep-pocketed development this may be, splashy and superficial it is not. With equal attention paid to both its physical, and spiritual, design, Blue Hound Kitchen and Cocktails appears to be a nice layover between that quirky, idealistic (and independent) hot-spot we Downtown die-hards crave, and the more manufactured corporate digs our transitioning Downtown still needs, despite those entrenched cravings to the contrary.

Weathered wood, untreated metal and communal energy pervade Blue Hound. Its deceptively raw interior is trimmed by art both playful and pointed, and, with its floor-to-ceiling windows overlooking the city just above street level, Downtown’s biggest inherent asset is always dining with you: a genuine urban environment.

Honest in its hotel restaurant genes, but clear in its stance to veer off course, Blue Hound’s food menu straddles the accessible and foreign. Arizona-grown food items are injected throughout, and responsibly raised and sourced produce, proteins and seafood have a clear agenda here. The balance between food-cost and food ethics hits a good middle ground here.

Executive Chef Steven Jones is a local player who knows Arizona well, too. From respectable stints at Tarbell’s and most recently Latilla at the Boulders Resort in Carefree, Jones understands local palates and what’s possible market-wise. Otherwise common short-ribs lean uncommon at Blue Hound, with their Flintstone-sized entry (full order $26; half $15). One of the menu’s biggest jewels, it’s a primal cauldron of tender red-meat that has been lacquered in a sarsaparilla-heavy barbeque sauce. The blue cheese grits that sit beneath show restraint, and the pickled peaches that bedazzle this aggressive rib are great, providing that perfect smack of summer.

The Kentucky-fried quail ($15) is another example of Blue Hound and Jones’ intention to tease without obscuring. Seasoned quail, fried flaky, screams of the famed Colonel’s secret recipe – Jones claims to harbor its secret mix – climbs a cube of foie gras cornbread (you read correctly) and swims in a sinful, spiced red bean gravy. These are trophy southern flavors twisted with reinvention.

Blue Hound’s beverage program is probably one of the outpost’s flashiest canons. Initially guided by San Francisco-based mixologist Jacques Bezuidenhout, but built-out and fully refined by two of the Phoenix area’s most talented and enthusiastic bar personalities Shel Bourdon and Tyson Buhler, the booze menu is extensive but smart, and reasonable: most cocktails float at price point of $10 or less.

Never overwhelming, the bar showcases a brainy catalog of top-shelf spirits. From gin to scotch, rye to mezcal, Blue Hound is clearly braiding the sentiments of timeless, prohibition-era cocktailing with the exploding ambitions of current craft cocktail trends. Much like the food menu at Blue Hound, these are hand-crafted drinks that will please ardent spirit geeks and surprise unknowing hotel guests alike. For something more serious, be sure investigate the appropriately named “The Darkness” ($10), a smoky cocktail with Bols Genever (think a malty Dutch gin), homemade lavender syrup, fresh lemon, mezcal, amaro (bitter herbal liqueur) and egg white. It’s floral, deep and smooth – the perfect introduction to an evening of menu hopping.

For something a little airier, swing for the Heathen Child ($10), a bright muddle of strawberries, Jamaican rum, strawberry-coconut creme, ginger liqueur, fresh lime and orange bitters. A cold pitcher of this on a sweltering Phoenix afternoon? Instant relief.

Blue Hound’s wine list covers ample ground as well, with almost 70 varieties – some on tap – represented efficiently. For sud lovers, a great craft beer checklist exists presenting options bottled and on tap, local and beyond. Blue Hound also flexes its muscle with its house-made ginger beer, served on tap – one of the first bars in Arizona to exploit this trend. Spicy and fragrant, their version is worth a sip. Added to a cold, fizzy cocktail or guzzled virgin, straight from the tap, it’s ginger beer on another level.

Exploring the rest of the Palomar’s multi-level lobby and common areas, you’ll also discover what is soon to be one of Downtown’s most buzzing perches, the expansive pool terrace and outdoor bar area Lustre. A colorful plank overlooking Downtown’s growing skyline, the entire space is ripe for early afternoons and late evenings lounging outdoors with icy cocktails and great gossip. Totally urban, totally un-characteristic of Phoenix (or Scottsdale), this space alone marks a new era in Downtown socializing.

Outside of Blue Hound Kitchen, and Lustre, the Palomar Hotel in its entirety lacks most of the pretension local cynics will be hunting for. Alien in its arrival it is not, the newest player on the block respectfully cues our neighborhood – and its possible future – without completely succumbing to its (sometimes) provincial pitfalls. It’s confident, proud and perfectly happy to be in Phoenix. 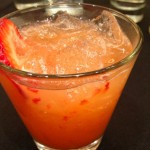 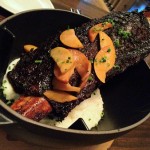 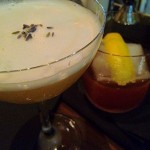 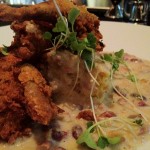 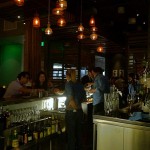 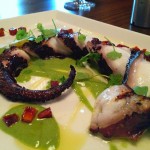 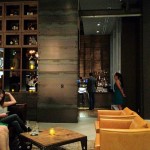 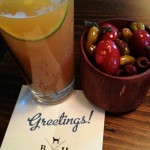 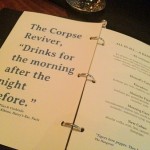 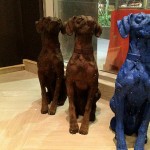 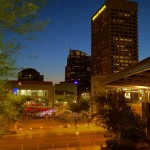 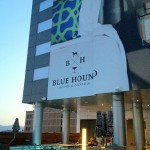 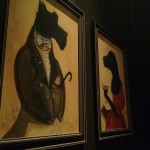