D-backs Digest | Down to the homestretch 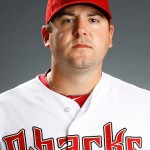 Still work to be done
The Diamondbacks remain in a comfortable position atop the National League West and will most likely celebrate a division championship sometime in the next week.

That doesn’t mean the Giants are not going to put of a fight. It has become clear that clinching the NL West crown is still going to take some work, as the San Francisco Giants are defending World Series Champions and are not going to just roll over and concede the division to the D-backs.

The Giants are poised to make the D-backs earn it, which isn’t all bad for the D-backs–they should have to earn it. The D-backs haven’t been in the drivers seat since 2007. It’s only fair that they battle it out until the end. Of course the success throughout the season has set up a situation where the D-backs could essentially put it in cruise control for the final two weeks of the season.

Unfortunately, that type of approach isn’t going to prepare the D-backs for the playoffs. They need to get into playoff mode now and play with the same edge that they’ve displayed all year.

The end is near
The lead in the West has been cut to only five. The Giants, winners of eight straight, will be traveling to Phoenix next weekend for a divisional showdown. Fortunately, there are only nine games to play and the magic number to clinch the West is only five.

The D-backs have the luxury of playing the remaining nine games at Chase Field. It’s possible the D-backs could clinch the division as early as Wednesday, but the best chance will come over the weekend when the Giants come to town. D-backs fans need to get their game tickets now. What better way to clinch than to do so against the defending champs? Also, the D-backs need and deserve the fan support.

It’d be great to have the house packed to help celebrate when the championship is wrapped up – assuming that will be the outcome.

First things first
The D-backs need to take care of business when the Pittsburgh Pirates come to town for a three-game series starting Monday evening. If the D-backs win the series, they’ll set up the opportunity to wrap it up against the Giants. If the D-backs stumble and end up losing the series, the pressure is going to mount.

The Giants could potentially come to Phoenix with an opportunity to pull even in the series. That would be devastating after such a positive stretch. Although possible, it would take a monumental collapse by the D-backs to allow the Giants to get back in the race.

D-backs look to be pressing
Heading into the game Sunday in San Diego the D-backs had lost three straight and were on the verge of being swept. Fortunately, Joe Saunders put together a solid start and the bats heated up a bit. Knowing they only need a few more wins, it’s easy to see how the team could be pressing a bit – especially a young team with little playoff experience.

Hopefully the D-backs can taste the championship on the horizon and use that as motivation. If so, it should be an exciting week in Phoenix.