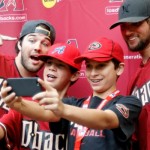 The Arizona Diamondbacks will host the 12th annual SUBWAY® D-backs Fan Fest from Noon-4:00 p.m. this Saturday, Feb. 20, at Chase Field. This year’s FREE event will offer fans unprecedented access to current players, coaches, alumni and broadcasters, including Q&A, autograph and photo sessions on the field. With more than 25,000 fans at Fan Fest last year, the D-backs have expanded this year’s event and will feature a variety of activities for everyone, including: