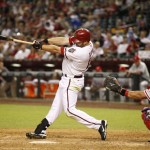 Who are the 2012 Arizona Diamondbacks? Expectations couldn’t have been higher for this team coming into the season. Through the first 96 games, the team has struggled to reach those lofty hopes. At times things seemed to be clicking and all signs indicated that a run wasn’t far off.

Unfortunately, something has always popped up to derail any prolonged success and disappointing stretches have outweighed the positives. Just when the D-backs had positioned themselves to creep back into things, they were swept at home against the Padres. Then after an inexcusable sweep in Chicago, the D-backs had a chance to salvage the road trip by winning the series in Cincinnati, just to blow a 6-run lead in the most disappointing loss of the season.

Despite the inconsistencies, underachievement, trade rumors and disappointment, the D-backs have managed to battle back to .500 and are still within striking distance of the Giants in the NL West and remain in contention for a wild card spot. The D-backs are finally taking care of business at home and beating teams they’re supposed to beat. If that trend can continue, the D-backs can keep things tight and play some meaningful baseball into August and September.

Put your hands together for Jason Kubel
If you’ve got a fever and the only prescription in more Kubel, then you’ve had plenty of medication to remedy even the most persistent headache. In a season characterized by the underachievement of key players, Jason Kubel has been an unquestioned bright spot. Kubel has made plays defensively throughout the season that answered questions about his rumored defensive deficiencies. Now he has been letting his bat do the talking. Kubel leads the team with 21 home runs and leads the National League with 71 RBI. He has picked up Justin Upton time after time and has established himself as the most feared bat in the lineup. Upton trade talks say a lot
At this point it sounds more and more like Justin Upton isn’t going anywhere. At least not right now. Regardless, the trade talks have been surprising, distracting and speak volumes to how disappointed management has been thus far regarding individuals and the team as a whole. Upton has always been one of the few players on the untouchable list – the short list of players that the team would never consider moving.

Upton was an MVP candidate last year and is supposed to be the cornerstone and future of the franchise. Hard to imagine things changing so quickly. There is no question that Upton has fallen well short of projected numbers, but trading him would verify a lack of confidence that he’ll ever reach his full potential.