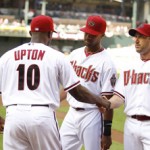 The D-backs open a four-game series in Miami on Friday, kicking off a 10-game east coast road trip. Maybe the change of scenery will lead to increased productivity. The D-backs have lost three straight series at home and finished the home stand with only three victories in 10 tries. The negatives and question marks clearly outweigh the positives from the recent series. Pitching, hitting, injuries and even base running can all be blamed for the losses. The team will need to get back to fundamentals in order to get back on the right track. Getting healthy wouldn’t hurt either.

Reasons for optimism
A few players have stepped up recently giving fans reason for optimism moving forward. Wade Miley made a spot start on Monday night against the Phillies, filling in for injured starter Daniel Hudson. Miley got the win, allowing only two hits in six shutout innings. Miley will likely make at least one more start while Hudson is out and would be a potential replacement for Josh Collmenter if his early season struggles continue. Justin Upton has continued to play through a nagging thumb injury that’s at least partially to blame for his relatively slow start. Upton finally tallied his first homer of the season this week and appears to be getting healthier each day. The D-backs clearly need his bat to warm up, especially while Chris Young is out of the lineup. Kubel proving to be valuable addition
When the D-backs announced the signing of Jason Kubel in the off season, skeptics questioned if the move was a mistake. The D-backs already appeared to be set at outfield prior to making the move and signing Kubel likely meant sending Gerardo Parra, fresh off his first Gold Glove season, to a platoon role. It appeared as though the organization had made a decision to sacrifice some defense for an increase in offensive potential. So far, Kubel has exceeded expectations defensively. He leads the majors with five outfield assists and has also started to produce offensively after a slow start. Kubel is currently riding a 10-game hitting streak.

D-backs bit by the injury bug
The increase in outfield depth came into play way sooner than anticipated when Chris Young landed on the 15-day disabled list with a shoulder injury. Depth at starting pitcher has been tested as well with Daniel Hudson on the DL. Last season the D-backs were lucky to stay relatively healthy throughout the season. With the exception of losing Stephen Drew partway through the season. If April is any indication, this season will be a different story.