A week ago, I wrote about the importance of Channing Frye to the offense the Phoenix Suns run. I talked about how the hate he receives is unjust and how his contract is turning out to be a bargain as he continues to improve.

Frye continued to prove my point with good showings last Friday in Milwaukee and Sunday in Oklahoma, where he pulled down a career-high 15 rebounds. Unfortunately, Frye didn’t get to finish the game in Oklahoma. 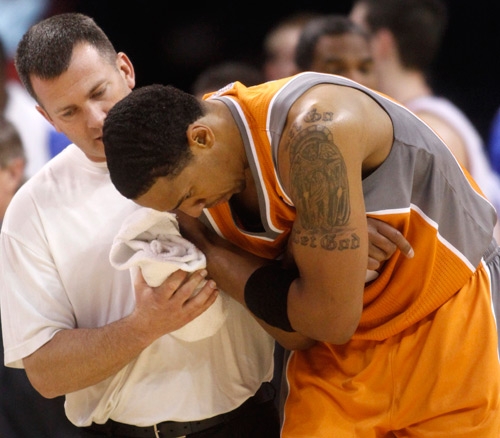 The Suns will be without Channing Frye for up to three weeks. AP photo.

In arguably the worst officiated game of the season (factually the worse when looking at free throw disparity), Frye was injured on a play where he was hit across the arm by the Oklahoma City’s Kevin Durant. The obvious contact wasn’t enough to draw a foul, but it was enough to dislocate the shoulder of the sharpshooting big man. This injury puts the Suns in a tough spot.

Currently, the Suns are playing their best basketball of the season. They’re in the midst of a tough fight for a playoff spot in the über-tight Western Conference, and Frye has been a huge part of that. His injury couldn’t have come at a worse time. The Suns
will once again have to adjust on the fly as Channing sits on the sideline to heal up.

Frye is expected to miss two to three weeks, which will put him out of about 10 games or so. Then, who knows how long it’ll be before he’s actually back in the flow of things once he gets back. Luckily for the Suns, they have a few options that could potentially fill the void left by Frye.

Hakim Warrick and Mickeal Pietrus are likely going to see the biggest increase in minutes, with Josh Childress getting some spot minutes as a result of the injury. All three can be assets on the floor when at the top of their game.

Warrick wasted no time taking advantage of the increased role. In his second start of the season, Warrick went off on the Houston Rockets with a career-high 32 points and pulled down eight boards. Hak certainly can’t spread the floor like Frye can, but his outside jumper has started to become more consistent and he can free up the floor for other guys by running the pick-and-roll with Steve Nash.

Warrick doesn’t rebound as well as Frye, but when aggressive he can be decent. Since just before the All-Star break, Hakim seemed to pick up his intensity level, and it has really begun to show.

Pietrus lacks Frye’s size, but in the system Coach Gentry and the Suns run, he can certainly fill in at power forward from time to time. On the offensive end he can provide much of what Frye does, but also has a little more ability and putting the ball down and driving to the basket. On the flip side, Pietrus won’t provide much as far as interior defense, but he is one of the team’s better perimeter defenders.

Childress is the wild card. While I don’t expect him to see a whole lot of minutes, if any, at the four spot, he could see some on the wing positions if either Grant Hill or Pietrus is asked to slide over at any point. I hope to see this happen. Childress is able to do a lot of the little things that can get overlooked and he has an ability to get the basket. He also gives the team another solid perimeter defender. If nothing else, I’d like to see Childress can a few more regular-season minutes, because you never know when a guy with his skill set could come in handy in the postseason.

All in all, the Suns should be able to withstand Frye’s injury, despite how well he had been playing. Warrick and Pietrus have both been playing at extremely high levels lately, along with the rest of the team, and I see no reason for that to change. If the guys keep it up, there’s no reason to think the Suns won’t sneak into the playoffs. Frye will return just in time to erase some of his demons from postseasons past.