When the 2010-2011 NBA campaign kicks off, Planet Orange will have a different look. With longtime Suns Amar’e Stoudemire and Leandro Barbosa off to new destinations and fan favorite Lou Amundson all but certain to do the same, the Suns have brought in some new faces to try and fill the void. 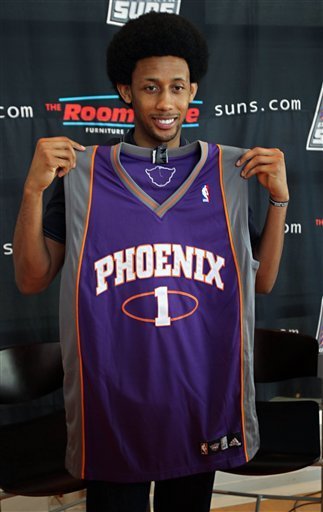 Josh Childress was introduced in Phoenix on Wednesday. AP photo

Hakim Warrick was the first player to join Planet Orange, acquired from the Chicago Bulls in a sign-and-trade with the Suns using part of the trade exception received from the New York Knicks in the Stoudemire trade.

Warrick will end up being a very underrated signing in my opinion. He will come in with an unfair disadvantage since he was the power forward the Suns signed after losing Amar’e, but he’ll most likely be replacing what Lou gave the team. He can play both forward spots, can get out and run and has a pretty solid mid-range jumper. He doesn’t have the defense or rebounding of Amundson, but he’s much more polished on offense and can run the pick-and-roll. Oh, and his contract is a bargain at about $18 million over four years (especially when you consider the contracts guys like Amir Johnson and Drew Gooden received elsewhere around the league).

Robert Sarver and Alvin Gentry (and presumably Lon Babby, who is hotly rumored to be the team’s new President) went overseas for their next move, convincing Josh Childress to come back home to the States in working out their second sign-and-trade of the summer, this time with the Atlanta Hawks. Childress has played in Greece the past two seasons, but the Hawks still retained his NBA rights.

Thanks to Atlanta stupidly overpaying to keep former Sun Joe Johnson, the Suns were able to use another portion of the Stoudemire exception to nab Childress and his ‘fro for a future second-round draft pick. I threw a fit a few summers ago when the Suns didn’t demand J-Chill in the Johnson trade, so I’m beyond excited to have Childress joining the Purple Gang. He’ll fit in perfectly. He can get up and down the court, play both at the two and three and has excellent perimeter defense. In addition to his on-court talents, Childress is a quality character guy that is sure to help with the Suns’ already stellar chemistry.

Finally, Phoenix was able to ship LB for Hedo Turkoglu. Initially, this was a move I was on the fence about, but it’s grown on me. Moving the Blur was clearly best for both the organization and Barbosa, but bringing in Turk’s contract could be troublesome. However, that all changed when Hedo was willing to give up about $5 million of his trade kicker and only guarantee half of his final contract year. By doing this, Turkoglu showed he wants to be here and he’ll work hard. If the Suns get the Turkoglu from Orlando and not the one from Toronto, this will be a great fit. Hedo will give the Suns the clutch shooter they’ve been lacking, someone unafraid to take shots with the game on the line. To top it off, he has great play-making ability, which will take some pressure off Steve Nash. Can you imagine Hedo and Frye and/or Lopez running the pick-and-roll together? It’s a legitimate possibility for the upcoming season. 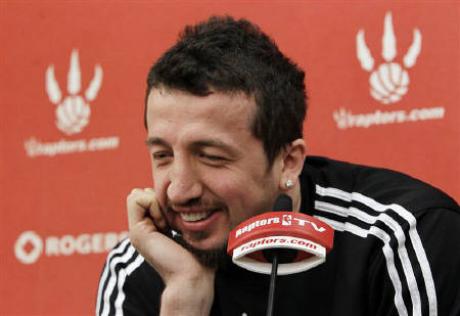 Hedo Turkoglu will be the new starting power forward for the Suns. Reuters photo

Hedo could have an impact off the court as well. Knowing how passionate European sports fans are and how they always show up to support their fellow countrymen, US Airways Center is bound to get a fairly large number of Turkish fans (with Turkish flags). Al-Hana and Baiz Market could both see a jump in clientele as a result. Heck, I’m sure Hedo will swing by there himself. Or, maybe Turk will just purchase a spot Downtown and open his own European club. We all know how much he loves to party.

Overall, I think these moves make the Suns better in the immediate future. Phoenix will be weaker up front and may take a step back in the rebounding department, but the perimeter defense will be much better and the offense may be the greatest in the Nash era. Plus, the Suns still have some of the trade exception remaining, so more moves could be on the way.