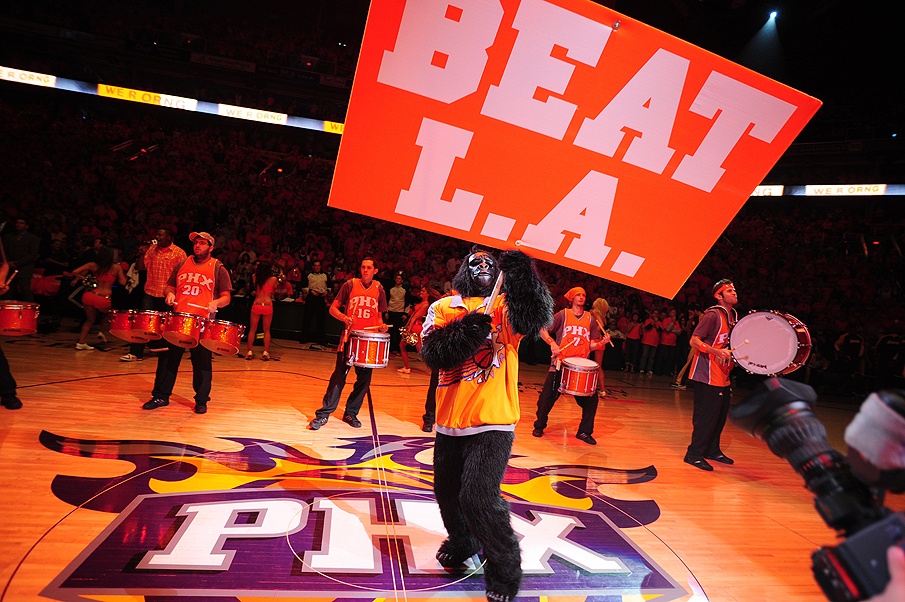 With just two games in the books for the 2010-11 season, the Phoenix Suns are sitting at 1-1. Not too bad for a team that most thought would start 0-3 with the first two games coming in two of the tougher places to play in the NBA.

In both Tuesday’s loss to Portland and Thursday’s win at Utah, the Suns showed positive signs. Hakim Warrick has looked good in both games, especially against Utah, when he had a filthy dunk and was immediately a trending topic on Twitter. Steve Nash and Jason Richardson have been fantastic, and the Suns’ shooting hasn’t been a problem like it was in the preseason.

There were also quite a few negatives, mostly coming in Tuesday’s loss to Portland. Phoenix was crushed on the boards and turned the ball over way too much. Both those things improved drastically on Thursday and should hopefully continue to get better.

But enough about the games we’ve already played. As much as I’d love to go on about what we’ve already seen, there’s a bigger, much more daunting task at hand: tonight’s game against the defending champion Los Angeles Lakers. That’s right, the Suns’ home opener comes on the second night of a back-to-back against the Lakers.

The consensus seems to be that the Lakers will smash the Suns tonight, being that the Suns are playing the second night of a back-to-back with travel, whereas the Lakers have been resting in Phoenix. Factor that in with the Lakers’ size (although starting center Andrew Bynum is still recovering from off-season surgery) and a Suns team trying to gel and get their chemistry, and the consensus may have an argument.

With that being said though, I’m going to have to disagree. Tonight’s game is going to be a close one. The Suns are going to come out fired up. Regardless if it’s a back-to-back or not won’t matter. This is the Phoenix home opener, so the excitement is going to be through the roof, especially for the new guys. Warrick, Josh Childress and Hedo Turkoglu will all be playing their first real games in front of the Phoenix fans, and you can bet they’re going to want to impress. And they will.

Warrick is who I’m really excited to see tonight, and you should be as well (did I mention his nasty dunk in Utah?). Coming off the Utah game and all the Twitter love he received, you know he’s going to be amped. Coach Alvin Gentry will surely try and get him more time with Nash, considering how well he’s working in the pick-and-roll.

We need more than the players to step up tonight, however. I’m looking at you, Planet Orange. We need you. We need you loud. We need you on your feet. We need you to be ORNG. Most importantly, we need you to hush all those rude (and I call them rude based on lots and lots of experience), annoying, Lakers fans. Just drown them out. We can do it! There will be more of us than there will be of them. We need to be up and screaming at the top of our lungs the entire time.

After the Suns/Lakers game tonight, be sure the swing by the Verve Energy Lounge at US Airways Center for a free concert presented by Budweiser. National recording artist Kelley James will perform. The concert is free to all who have a game ticket.

This Saturday, October 30, you’ll have a chance to meet Suns forward Jared Dudley, along with The Gorilla and the APS Solar Squad. Dudley will be at MidFirst Bank in Glendale signing autographs from 1 to 2 p.m.