Suns Spot | Is it That Time Again Already? 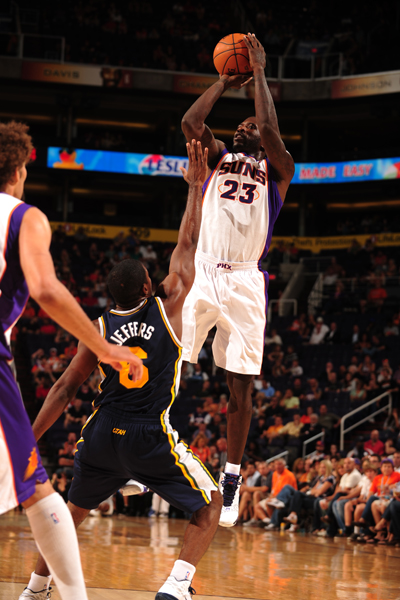 The Suns have shown flashes of excellence this preseason. Photo by Barry Gossage/NBAE via Getty Images, courtesy of Phoenix Suns.

It seems like just yesterday we were watching as our beloved Suns battled the hated in the Western Conference Finals for an NBA Finals berth. A lot has changed since that time. Amar’e Stoudemire, Lou Amundson and Leandro Barbosa are in different uniforms. Hedo Turkoglu, Josh Childress and Hakim Warrick are new in town, and the Suns Spot is back to give you insight and thoughts on yet another exciting season of Phoenix Suns basketball.

This past Tuesday I was able to catch my first glimpse of the new-look Suns as they faced the Utah Jazz in their preseason home opener and fourth preseason game overall. The Suns lost 105-100 in what ended up being quite a good game, especially for the preseason. Despite the loss, I saw a lot of positives that make me very excited for this year’s campaign.

The starters looked solid. Offensively, they moved the ball well. Robin Lopez showed the ability to run the pick-n-roll with Steve Nash and do it effectively. Jason Richardson was aggressive, but not too aggressive. J-Rich looks like he knows he needs to be the leading scorer for the team this year. Grant Hill was Grant Hill and Nash was Nash. Unfortunately, we were only able to see about nine minutes of Hedo, as he sat out most of the game with a back bruise, but he didn’t look bad in what I saw.

On the defensive side and on the glass the guys showed a lot of energy. Lopez had at least one block he was credited with and changed a few other shots. He did pick up a few fouls, but they were questionable. On one possession Turkoglu was draped over Utah’s Paul Millsap and forced him into a tough shot. Millsap hit the shot, but the defensive effort was impressive nonetheless.

One plus to Hedo being limited was seeing Warrick play with the starters. He looked good and at one point received a nice lob pass from Nash that he turned into a reverse dunk. Warrick in the starting lineup is something I think could actually benefit the Suns. He would give Nash another option in the pick-n-roll and it would allow Hedo to run the offense for the second unit. I’m curious to see if this thought ever crosses coach Alvin Gentry’s mind when he’s tinkering with the rotations.

Speaking of the second unit, they were very strong. A lineup of Warrick, Childress, Channing Frye, Goran Dragic and Jared Dudley went on a huge run in the fourth quarter to get the Suns back in the game and give them a brief lead. Second-year forward Earl Clark was part of the run as well, as he replaced Warrick about halfway through and looked good, especially on defense, where he picked up four blocks.

The defense of the Suns bench showed why it will be a strong point for the team this year. They were very active and played with a lot of hustle. They applied near full-court pressure and fought for every rebound. Childress was most impressive fighting for boards. Dragic, after struggling and looking somewhat out of control in the first half, ran the offense to near perfection in the second. Dudley is looking leaner and much better at creating his shot, which could come in handy with him expecting to see a lot of time at the two spot this year. Frye looked much improved on the defensive side of the ball, but struggled to knock down shots. This is no worry, though, as this was just Frye’s second preseason game after missing the first two for the birth of his son (congrats, Channing!).

All in all, the Suns look to be gelling well and will without a doubt be ready once the regular season kicks off in about a week-and-a-half.

This year, the Suns are looking to add a new element to their in-arena entertainment as they are searching for a DJ to entertain fans at US Airways Center along with arena host Ced Ceballos, The Gorilla and Suns Dancers. Candidates must be 21 years of age or older and are asked to send demo tapes and résumés to the Suns Vice President of Game Entertainment by Monday, October 18. Finalists will be chosen and asked to perform at US Airways Center. Fans will then be able to view the footage and vote online at Suns.com for the DJ they like the best. The winning DJ will perform for the first time at the home opener on October 29 against the .