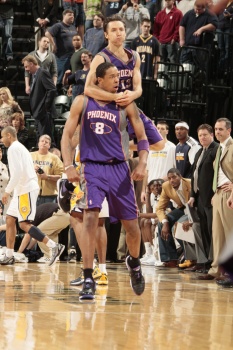 Last week, I had originally planned to write about Channing Frye. The Phoenix Suns’ last-minute trade of Goran Dragic and a draft pick to the Houston Rockets for point guard Aaron Brooks pushed my piece on Frye back a week. It appears to have worked out in my favor.

Those shots were both huge. Not only because those were games the Suns had to win, but those are also the type of shots that can boost the confidence of Frye and the team as a whole. That’s not what I want to talk about, though.

Let’s talk about the overwhelming amount of hatred Frye seems to get from the majority of Suns fans. The Chandler native only seems to trail Robin Lopez and Vince Carter in fan disdain, and I can’t figure out why.

I get that people think he’s overpaid. And maybe he is. You can make an argument for both sides. Bottom line though, there are certainly a lot of guys in the Association making equal to or more than Frye that provide less production for their teams. Not only are some of these guys less talented, but they also don’t even bring the effort.

I’m not much of a numbers guy, so I won’t bore you with statistics, but rather simply explain what I see watching Frye play.

The first thing that stands out to me is Frye’s effort. The former Wildcat plays with a passion and gives his all on the floor. How many times have we seen a player have one great season, sign his big contract and just phone it in after that? It would’ve been very easy for Frye to do this, especially given his early season struggles. He didn’t. He’s continue to work harder and is having arguably his best season ever.

Frye’s importance to the Phoenix’s offensive style is oftentimes overlooked. In my opinion, he’s the second most important player behind Steve Nash when it comes to making this offense work. It doesn’t even matter if he’s hitting his shots. The threat of Frye getting hot spreads the floor and allows Nash room to operate. Frye could be 0-20 and the opposition still wouldn’t leave him wide open because that would be downright foolish.

His 6.5 rebounds a game may not look impressive given his size, but when you factor in that more often than not he’s out around the perimeter, that total looks a lot better. His defense isn’t half-bad, either. His team defense is solid, and he holds his own in the post. Plus, he’s good for at least one block a game.

My theory is Frye came on so strong as a three-point shooter a year ago, that people expect him to hit threes and that’s it. Fans fail to notice the other things he does. His defense, rebounding and inside game have all gotten better and he is still young enough to continue to improve. Eventually, others will take notice.

Frye is one of those guys that should be easy to cheer for. He’s a hometown guy, he never complains, he puts the goals of the team first and he gives 110% every game. He’s what’s right about the NBA. He makes me proud to be a Phoenix Suns fan and prouder to be a native of Arizona.

Be sure to pick your tickets for the Suns and Stars Gala 2011. The Suns and Stars Gala is an event that gives fans the opportunity to rub elbows with their favorite Suns players while raising money for charities. In addition to meeting Suns players, fans at this year’s event will get to see a performance from the legendary Huey Lewis and the News. This year’s event takes place on Friday, March 11 at Talking Stick Resort. Fans can learn more by visiting the Suns charities website here.