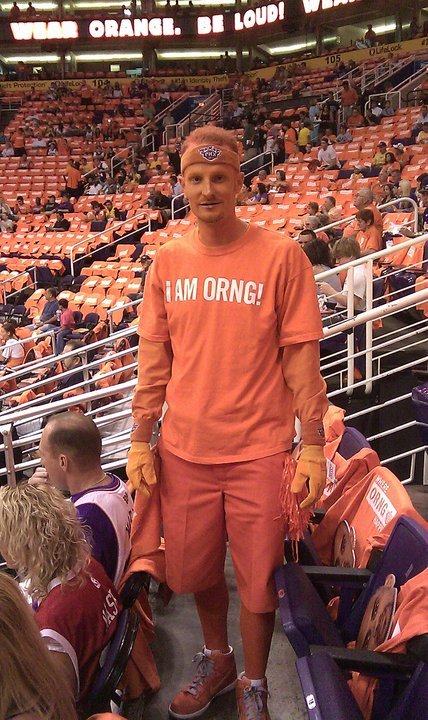 Mr. ORNG gets loud at US Airways Center, so why can't you?

To say the Suns have been struggling lately is an understatement. Their four-game losing streak couldn’t have come at a worse time. With 16 games remaining in the regular season, the Suns are now sitting back at .500 and are two-and-a-half games behind the Memphis Grizzlies for the eighth and final Western Conference playoff spot.

With a hobbled Steve Nash, a zombie-like Vince Carter and an injured Channing Frye, things aren’t looking good. Tonight, though, the Suns will have a chance to start saving this sinking ship.

The Golden State Warriors will be visiting US Airways Center this evening in Downtown Phoenix, and quite frankly, they’re a pretty bad basketball team. The Suns won the previous three meetings against the Warriors this year, and they must complete the season sweep tonight if they want to have any chance to salvage their playoff hopes.

I think it starts with the fans. The Suns haven’t been a very good home team this year, and I think a large part of that has to do with how quiet the crowd has been the whole season. Maybe quiet isn’t even the word; it gets loud. Problem is, its gets just as loud cheering for the opposing team as it gets cheering for the Suns.

Teams don’t fear coming to Phoenix. They know that a good portion of the fans in attendance will be cheering them on. Twice this year I’ve heard chants for the visiting team drown out the Suns fans. That has to change.

The Suns don’t have a lot of home games remaining, but they have enough that we could at least begin to turn the tide. We can turn Planet Orange into a legitimate sixth man. The Purple Palace can and should be a place teams fear, but it starts with us.

Golden Sate is a tough place for teams to play. Not because the Warriors are a good team, but because the fans bring the energy every night. There’s no reason we can’t do the same in Phoenix.

My call to you, Suns fans, is to get out to every remaining game you can this season. Don’t allow fans of the other team waltz into our house and put their feet up. Stand up, be loud and keep them quiet. The Suns are still in this playoff race, but they can’t do it without us.