If you’ve lived in the Valley long enough, you’ve probably seen “Psyko Steve Presents” stamped on many a flyer and poster. But who is this Psyko Steve?

Stephen Chilton, an Arizona native, has been promoting shows for a decade, and has showcased so many bands that Coachella might even be jealous.

Every promoter has to start with what they’re familiar with, so Chilton started his promotion career with friends’ bands. 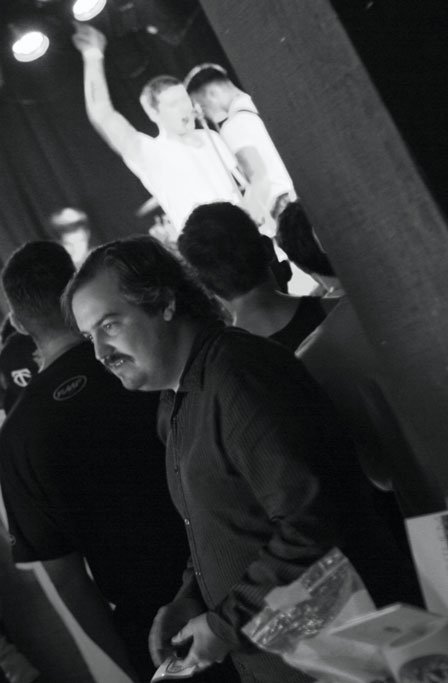 You can find Psyko Steve at neighborhood venues like the Rhythm Room, the Trunk Space and Hard Rock Café. Photo by Maria Vassett.

“Really, it just started by helping bands in high school,” Chilton recalls. “I kind of just fell into it.”

And that’s when Psyko Steve was born.

“It was just a dumb nickname in high school and it stuck,” Chilton says of his “psyko” moniker, as easygoing as ever. “There’s no cool story about it.”

Chilton grew up in the East Valley, and hit his stride in 2000, when he started promoting. Back then, the Nile Theater in Mesa was still going strong, but a new venue was on its way up in Downtown Phoenix. The venue? Modified Arts. Chilton started booking shows there with bands like Before Braille, Fight Shy and others.

“Modified was just the small place that everyone could do anything,” Chilton says. “It was kind of the perfect place to do that stuff.”

For nearly a decade, Chilton and Modified had a close relationship to say the least. Before being converted into a gallery space late last year, Chilton put together Modified’s last shows, including a surprise Jimmy Eat World show.

“To see a band of that caliber in Modified was crazy,” Chilton says of the multi-platinum Mesa band.

Jimmy Eat World wanted to grace the iconic Downtown stage before its conversion, and no one knew about the show until the day of. When word of mouth hit everyone’s ears, the show was pushed far beyond capacity.

“We had to turn away more than 1,000 people,” Chilton recalls. So much for it being a secret.

Psyko Steve has promoted countless up-and-coming bands before they found their way to thousands of iPods. Cold War Kids, All-American Rejects, Motion City Soundtrack and Thrice have all visited Arizona in conjunction with Psyko Steve Presents.

Chilton also deserves the credit for being a stepping stone for local bands like Scary Kids Scaring Kids, Greeley Estates, Miniature Tigers and Dear and the Headlights.

But Chilton isn’t the kind of guy to demand credit. It seems like he’s doing his civil duty by helping bring a band from nothing to something. And he always likes to bring the attention back to his home state. He planted an Arizona seed at South by Southwest by putting on the showcase called “I Heart AZ” featuring only Phoenix bands like Kinch, Dear and the Headlights, Miniature Tigers and What Laura Says. The showcase attracted about 2,000 attendees.

“One of the things I like about Phoenix is that there are all types of different bands that are doing well,” Chilton says. “There isn’t one sound that is a Phoenix sound.”

Phoenix bands have grown so much throughout the past 10 years, and the scene has definitely progressed toward Downtown Phoenix. Chilton, who lives in Garfield, aims to promote Downtown as much as possible, and regularly books shows at Downtown spots.

Last year, he put on nearly 100 shows, and this year he thinks he’s on his way to the same. Be on the lookout for Psyko Steve Presents shows around Downtown and beyond!