Jimmy Eat World’s Not at All Secret Show

He said: ‘I am but one small instrument.’ Do you remember that?

As Jim Adkins rifled these melodic words into the crowded Arizona night, I realized that history was in the making. What that history is exactly remains to be seen.

The creaky floorboards of Modified Arts trembled in the wake of a rock that has become all too familiar. The lyrics were shouted back with fervor and angst that seemed to settle in the room’s thick air. This was the place to be, Phoenix. For a “secret” show, it sure was let out of the bag. As Jimmy Eat World had tweeted earlier in the day, “If you live in PHX and have plans for tonight, cancel them.” This seemed like a fair warning at the time.

Jeff Bufano of Reubens Accomplice, the supposed headliner before the news broke, crowed, “[You must] have that Twitter thing on your phones or something.” Perhaps that is the truth, as the masses started assembling as early as 3 p.m. for a 7 p.m. start. Who says Twitter isn’t powerful? 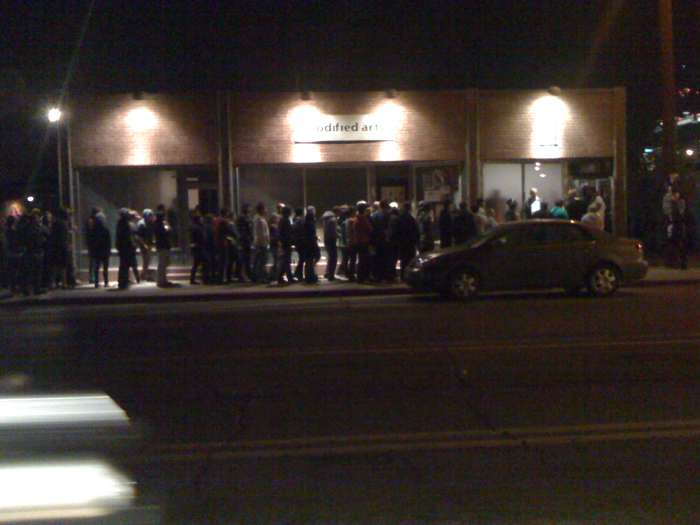 The crowd waiting to try to get into the show

Upon arriving at around 6:10, the line wrapped entirely around the place; to the point that it began to wind back up to the front entrance. It didn’t seem long until the cry was let out that it was sold out and the lines weren’t getting in. “Extremely limited space” is not a joke.

The lineup for the night included Ian Stupar of El Oso Negro, Source Victoria and Reubens Accomplice. For the most part, the opening bands were making way for the much-anticipated headliners to take the stage. Stupar opened it up with a few original songs and finished up a mellow set with covers of Reubens and JEW songs, respectively. Source Victoria took the stage with melodic guitars and harmonic vocals to tame the room. “You guys are here for Reubens, right?” was the joke of the night from our openers. Once Reubens Accomplice took the stage, you could feel the room on the edge of its seat. Reubens threw some eagerly anticipated songs at us. As far as their several-years-in-the-making album, Bufano joked, “We’ll release it in four years. But, it will have 176 tracks and you guys will be blown away.” 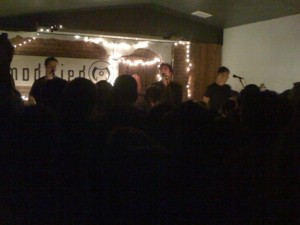 To say it was a sell-out is an understatement.

By the time Jim Adkins and crew took the stage, the eagerness was dripping off the walls. There was definitely something special about this “secret” show. You could feel it in the room. Even though I did not have the privilege of growing up here, this concert felt like it was drumming up the spirits of 10 years ago. Everything was perfect in that regard. From Adkins beckoning Sam Means (The Format) to the stage in jest, to the strained voices in the back crying out for “one more song” or to “play all night,” this night belonged to the fans, the bands and this city. “Bleed American” began the shouted refrains and huddled, rhythmic masses in their dance with the night. Once “Goodbye Sky Harbor” echoed in the room, you could feel the excitement that this city has, not just for its most notable band, but for its music scene.

I can still feel the guitar riffs pumping through my veins. I imagine that I will for days. If you were not one of the privileged to get inside the doors, I feel that an important message was passed down. Adkins, at the chanting for an encore, returned to the stage. He said something that I think all of Phoenix needs to hear: “If you love the arts and the music, support them. Go to the shows. Support the bands.” This seems simple enough, but it is something that we as a community need to do perhaps now more than ever. We need to coddle these young, talented musicians and venues and treat them like the treasure they are.

So, the big “secret” show wasn’t about how popular Jimmy Eat World is in this place, but more about how much these little places, artists and stages mean to our community.