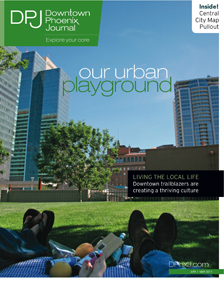 DPJ magazine’s April/May issue is hot off the presses and on the streets of Central Phoenix today! Come pick up a copy at the March Radiate PHX event at FilmBar or one of 300 locations in and around Downtown. Just a few of the issue highlights: