Phoenix-turned-Brooklyn band Miniature Tigers are coming back to their hometown on their headlining tour to release their second record, Fortress.

The band, comprised of Charlie Brand (vocals, guitar), Rick Schaier (vocals, drums), Algernon Quashie (guitar, keyboard) and Alex Gerber (vocals, bass), was founded by Brand and Schaier in 2006, and they had friends fill in until they found Quashie and Gerber last year. 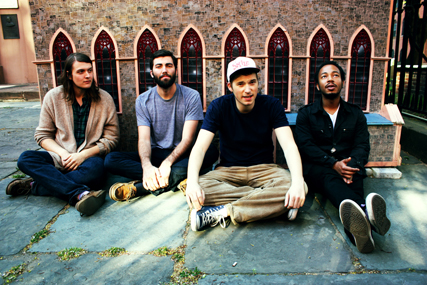 The Mini Ts have a few notches on their belt when it comes to touring. They toured for seven months in 2009, playing some notable shows with Ben Folds. This year, they’ve already toured with indie bands Free Energy and The Morning Benders.

Now supporting Fortress on the road, DPJ chatted with Brand as he was prepping for a show in Seattle.

“We listen to a lot of music, read and watch movies,” Brand says about what the band does on tour. They explore the cities they play in quite a bit, too. Amongst their favorites: San Francisco, their new hometown of New York and Phoenix, of course.

In all this time on the road, the band has played around with its sound as well. Brand thinks Fortress will be familiar enough to old fans, but it also expands the band’s sound.

“It’s more psychedelic and has more of an experimental element to it,” he says.

Miniature Tigers got their start playing all over Downtown in their Phoenix days at Modified Arts, The Rhythm Room, The Trunk Space and The PHiX. Now, they have been recognized in music bibles like Rolling Stone and SPIN, and will be playing this year’s Lollapalooza, yet Brand feels their musical success has been “slow and steady.”

Yet they’ve hardly been moving slowly lately, having recently shot a video for their new single, “Gold Skull,” produced by Neon Indian, and readying Fortress and an extensive touring itinerary.

Fortress will officially be released on Tuesday, the same day Miniature Tigers will be in Phoenix to play at the Rhythm Room. The Spinto Band, Owan Evans and Phoenix-based rockers Kinch and are also on the bill. The show starts at 7:30, and tickets are only $10 in advance or $12 at the door.

For a preview, listen to “Gold Skull” now.