If you take Local Natives and mash them with some Saddle Creek Records bands with a dash of Mogwai, you’d have Phoenix’s Snake! Snake! Snakes!

Haven’t heard them yet? You will soon, because Snake! Snake! Snakes! is having its first EP release show on August 11, and you are personally invited.

The band was a three-piece for many years, with friends helping here and there to play shows. Finally, they settled on a lineup of Jonathan Messenger (vocals, guitar), Christopher Sanchez (bass), George Rodriguez (keyboard) and David Cooper (drums). 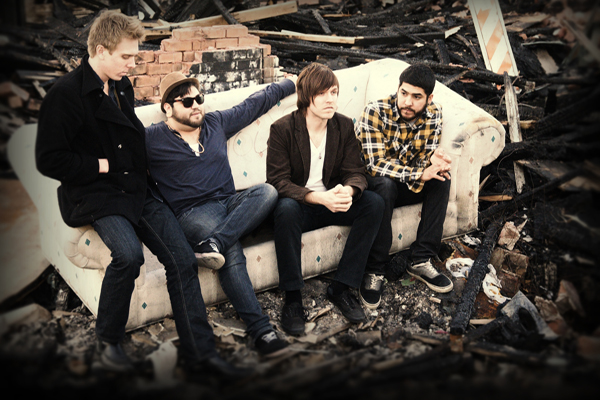 Messenger, Sanchez and Rodriguez were called The Tuning Room for about four years until Messenger decided on Snake! Snake! Snakes! Sanchez added the exclamation points. DPJ talked to Sanchez about snakes, music and Phoenix.

“We’re not into snakes or anything like that,” Sanchez says, putting an end to any speculation.

As the band was starting to craft its first songs, they were having just one problem: finding a drummer. Every time they did find one, they would throw away their songs and start all over again.

“We went through at least eight drummers before we found David,” Sanchez recalls. Cooper was the guy next door who became a bandmate.

SSS has played mostly Downtown Phoenix venues like Modified Arts, the PHiX and The Rhythm Room, but they’ve also played in the East Valley and some spots in Tucson.

“People are starting to dig us a lot more,” Sanchez says after playing regularly for some time.

They were recently on Radio Phoenix, but they’re still new to the idea of getting interviewed and being in the limelight. However, through the power of the Internet, fans have popped up in New York, Hawaii and even Canada.

Their self-titled EP has five old but rearranged songs on it and one that was written only three days prior to recording.

“We ended up liking it so much that we recorded it,” Sanchez says.

Before recording, the band had “never made a real, legit CD,” but had some bedroom recordings, so spending time in a studio was something new.

“We actually recorded this in March,” Sanchez says of the EP. “We’re big-time slackers. It was supposed to come out in June, then July, and now August.”

If you’re too anxious to wait until next Wednesday for the physical copy, you could buy it off iTunes right now, but you should wait for the real deal, because Messenger’s album artwork gives it a better touch than the digital copy.

SSS is planning a tour later on this year, but things aren’t set in stone.

“We want to get on the road real bad,” Sanchez says eagerly.

They band’s goals right now are touring and eventually recording a full-length album, but they have something even bigger they want to check off their bucket list.

“Our big dream and our big goal is to play the Conan O’ Brien show,” Sanchez says. By the time O’Brien’s late-night show debuts on TBS this fall, they may be ready. But if you don’t want to wait until then, why don’t you join me at the show next Wednesday?