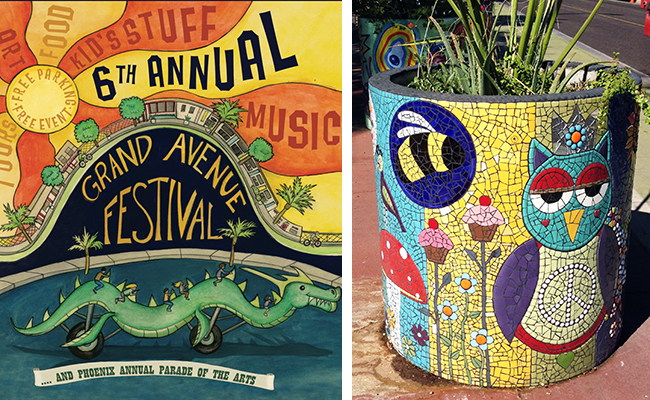 This weekend’s Grand Avenue Festival, in partnership with the Phoenix Annual Parade of the Arts, will fill the streets with music, arts and interactive fun for all ages.

Back for More Grand Times

Have a Grand Holiday Shopping Experience

Where better to find a quirky, offbeat, affordable gift than Grand Avenue? The first “Holiday Shopping ExtravaGRANDza” is Saturday, Dec. 5, starting at 10 a.m.

For proof that art lovers are about more than schmoozing and sipping cheap wine from plastic glasses, one need look no further than Art Detour, the free, self-guided tour of downtown artist studios, galleries, and art-friendly businesses. Now in its 21st year, the Phoenix tradition, which typically draws upwards of 10,000 patrons, has bridged the wide gap between artists and suburb dwellers who think art should match their throw pillows. This year, both art fans and the artless will find the Detour even more accessible, thanks to light rail and a new, improved shuttle system.