Arts and Culture Contributes Over $400 Million to Phoenix’s Economy 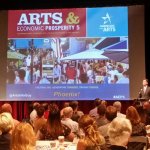 Arts and culture contributed over $400 million to the Phoenix economy in fiscal year 2015, the most recent period analyzed by Americans for the Arts during their regular five-year assessment of the business sector. “Phoenix is rich with talent and blessed with a vibrant and authentic arts and culture scene,” said Mayor Greg Stanton. “This study proves what art-lovers and smart business leaders already know – when we invest in arts and culture we make Phoenix a more interesting and attractive place to live, and we strengthen our economy.”

The AFTA study of economic impact by audiences and nonprofit arts and culture organizations takes place every five years. Fiscal year 2015 represents the organization’s 20th year for tracking economic output, employment and community impact of arts and culture. The study covers 341 cities, counties and regions across the nation. It also tracks state and local revenue generated for the arts and whether it’s a tourism opportunity or a local amenity.

In Phoenix, nearly 13,000 workers have full-time equivalent jobs associated with arts and culture. This includes employment by venues and facilities, and the jobs generated within the hospitality sector: restaurants, bars and lodging. Part-time jobs are combined so that every 40-hours worked is the equivalent of one full-time employee. The strength of the arts and culture business sector is seen in diverse activities like the Phoenix Symphony, theatrical and music performances, the museums across the city, and First Friday, which USA Today calls one of the ten best art walks in the U.S.

“This study proves to me what art-lovers already knew – arts and culture investment significantly improves the quality of life of our residents, and the economic well-being of our city,” said Mayor Stanton. “The numbers drive home that people clearly want more and diverse arts and culture opportunities, and that investing in the arts is a win for business!”

In July 2017, the Phoenix metropolitan area had 32,000 workers in arts, entertainment and recreation, according to the Arizona Office of Economic Opportunity. That was an increase of 1,900 from July 2016, and a 6.3 percent increase in the workforce. The hospitality industry employed 190,500 people in the metro, up 13,000 from last year.

“The arts and culture provide inspiration and joy to residents, beautify public spaces, and strengthen the social fabric of our communities,” said Robert Lynch, president and CEO of AFTA in the report. “Nonprofit arts and cultural organizations are also businesses. They employ people locally, purchase goods and services from other local businesses, and attract tourists. Event-related spending by arts audiences generates valuable revenue for local merchants such as restaurants, retail stores, parking garages, and hotels.”

From the nearly $402 million in economic output, the arts and culture industry generated nearly $45 million in tax revenue inside the city of Phoenix for the city and state governments, a number similar to the national average for cities over 1 million population. Phoenix is the fifth largest U.S. city with 1.6 million population in 2016. An additional $5 million in tax revenues were generated for the city of Mesa and communities in the West Valley.

“When we support our community’s arts and culture organizations, we’re adding value to every neighborhood in Phoenix,” said Phoenix Vice Mayor Laura Pastor, chair of the City Council Parks, Arts, Education and Equality Subcommittee. “The Arts directly contribute to our City economically, supporting tourism and attracting visitors to see the city.”

AFTA describes total economic impact as the “respending” of arts and culture dollars within the city. “(Total economic impact starts) with the theater’s initial paint purchase and ending when the last of the $100 leaks out of the community,” said Lynch in the report. “It is composed of the direct economic impact (the effect of the initial expenditure by the theater), as well as the indirect and induced economic impacts, which are the effects of the subsequent rounds of spending by businesses and individuals, respectively.”

In 2015, AFTA reported that more than 6.8 million attended Phoenix-based arts or cultural events, a number not that far from being the equivalent of Arizona’s total population. The vast majority of patrons, nearly 5.5 million, were local; the remaining 1.3 million were nonresidents.

The City of Phoenix Office of Arts and Culture annually awards grants to Phoenix not-for-profit organizations to provide arts and culture programming for the public. The 2017 economic impact report shows that for every $1 the city invests in arts and culture the community receives $26 return on that investment.

AFTA concludes that cultural tourism is an opportunity for the city to increase the economic contribution of arts and culture organizations. In its sampling of attendees, the research determined that for 29 percent, coming to Phoenix for the event was the primary purpose of their trip. More than half stayed overnight at least one night.

The Phoenix study, which shows numbers at the highest since the pre-recession AFTA report, said that the arts and culture industry sector is a major contributor to the Phoenix economy, as well as to the quality of life and amenities that Phoenix strives to promote in economic development.