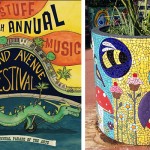 The free Grand Avenue Festival, November 8th from 11am – 9pm, produced by the Grand Avenue Members Association, is ramping it up this year with their partnership with the Phoenix Annual Parade of the Arts (PAPA). Complete Festival information, including a Festival Guide, can be found at the main info table at 1501 Grand Avenue (corner of Grand/Roosevelt/15th Avenue); in front of Bragg’s Pie Factory (1301 Grand), and at the La Melgosa building(1023 Grand). Visitors can also print their own Festival Guides at: www.grandavenuephx.wordpress.com The Grand Avenue Festival and PAPA have similar missions of bringing the arts and community together. The combined events will be a celebration of the vibrant culture, art, history and adaptive re-use of the Lower Grand Avenue Arts and Small Business District, as well as an audience participatory arts and performance parade.

Free on-street parking is available on both sides of Grand Avenue from Roosevelt to Van Buren; in the lot just east of Treehouse Bakery (1348 W. Roosevelt); on the west side of the PAPA staging area; Bragg’s Pie Factory parking lot (1301 Grand – ONLY after the craft fair ends at 5:30); and various side streets and smaller parking lots. Free pedi-cabs will be available during the day; visitors are encouraged to bike and use the temporary bike racks installed by Valley Metro for the day at – Thirdspace, 1028 Grand; La Melgosa,1023 Grand; and Bragg’s Pie Factory, 1301 Grand.

The PAPA staging area is at the lot south of the Oasis on Grand (1501 Grand), and will host Otherworlds Faerie Festival, the Goblin Market, and the Moon Mermaid, as well as other eclectic and magical entertainment. Visitors can make their own masks and costumes for the PAPA parade and also participate in a variety of children’s crafts at the PAPA lot and in the courtyard of the Oasis on Grand.

The Untrashed Recycled Rubbish Fashion Show, a festival highlight each year, will take the stage at 4pm, and travel south to Mckinley to show off fashions made primarily from trash and recycled materials. Judging and prizes will take place at 4:30 at the PAPA stage. The actual PAPA parade, complete with Taiko drummers, stilt walkers, fabulous costumes, and creative, non-motorized floats, leaves the staging area at Roosevelt and 15th Avenue at 6pm, and heads south on Grand, continuing to Van Buren, then returning to the stage for judging and prizes around 7:30pm. Parade and fashion show participants can register on-site the day of the event at the PAPA info table. The section of Grand from Roosevelt to Van Buren will be closed to through traffic from 6 – 7:30pm ONLY.

Historic building tours will take place at 11am and 2pm (meet your tour guide at the info table in front of Bragg’s Pie Factory, 1301 Grand) as well as tours of the new artist-decorated planters, at 11am and 3pm (same start location). Visitors can also pick up planter and building maps for their own self-guided tours. ver 50 bands, with a whole range of sounds, will be featured at various venues throughout the day (pick up a schedule at the info tables or in the Festival Guide). Other highlights of the day’s activities include the “Retro Vintage – Yesterday Today” fashion show at Gallery Marsiglia, 1022 Grand, from 4 – 5pm, featuring unique jewelry designs, a flamenco performance, and a sidewalk runway show; the Grand Avenue Craft Fair from 11am – 5:30 pm, 1301 Grand, with over 40 vendors of unique handmade arts and crafts; and the Peace Train, an artist-designed and furnished ‘train’ with interactive rooms, a colorfully lit exterior at night, and a message of peace – sponsored by Walter Studios. A live mural painting project will take place at 1015 Grand (between La Melgosa and Grand Avenue Garage). The “CHill on Grand Scavenger Hunt” will begin at 1818 Grand, where festival-goers can pick up scavenger clue cards and then have fun finding items hidden within the Festival.

Maps for the quirky Hanging Garden and Woven Fences project, a project sponsored by the Kooky Krafts Shop each year, are available at the info tables (or enclosed in the Festival Guides). Projects this year include an 8 ft. long papier mache dragon by Carolyn Watson Dubisch (this year’s poster designer); a Metallic Dream Tree by Denise Yaghmourian; a fence weaving “You Are Grand” by the Confetti Club; a mixed media fence installation by XPLFNT called “FMRL”; whimsical Wig and Petticoat Flower Gardens by Beatrice Moore, and many more.

Visitors can also take a self-guided tour of some of the unique working art studios in the neighborhood. A list of art studios is available in the Festival Guide. And several exhibits of note during the day include the ArtFarm Collective inaugural exhibit at the Oasis on Grand, 1501 Grand; “WEARizona” at Bragg’s Pie Factory (1301 Grand), a showcase of Southwest historic and contemporary fashion curated by Arizona’s favorite Hip Historian Marshall Shore; and “Disappearance”, by S. Gayle Stevens at the Tilt 2 Community Gallery (915 W. Fillmore), featuring wet-plate tintype photograms of bees depicting the bee colony collapse disorder.

For those interested in transportation issues, visitors can find out more about the proposed Grand Avenue Rail Project, by visiting their info table at Motley Design Group, 1114 Grand. Or get info on the new Grid Bike Share program, including some demo bikes, at the new racks in front of the Bragg’s Pie Factory building.