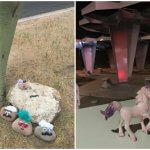 Answer the call by making your mark in the greater downtown PHX area during this weekend-long Do-It-Yourself (D.I.Y.) tour de force of self-guided creativity, doing it any time between 6 p.m. on Friday night and Sunday at 6 p.m.

Downtown PHX is our working environment and its public visual surfaces our canvas. We have a deep identification and empathy with the city. Our work is implemented here, as a form of protest, critique, irony, humor, beauty, celebration, subversion, or clever prank.

Make it. Place it. Document it. Post a photo online. #DIYPHX2017

Street art coverage for this event extends to all of greater downtown PHX, but three areas are especially noteworthy:

LOWER GRAND AVE
Running from the 7th Ave. & Van Buren intersection to just north of the 15th Ave. & Roosevelt St. intersection, Lower Grand Ave. retains a quirky urban commercial feel, and includes many examples of street art (from yarnbombing to planter mosaics) among the independently-owned and artist-run businesses located in the area. WAREHOUSE DISTRICT
Just south of the railroad tracks (between the 7s), downtown’s Phoenix Warehouse District draws creative ventures and tech start-ups alike. However, when it comes to street art, the area is a blank slate. Let’s change that!

For more information, helpful hints, and local street art examples, go to the Show It! Say It! Do It! Downtown Street Art Challenge Facebook event page.