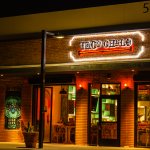 Wire* — Taco Chelo, the newest addition to Roosevelt Row’s food and arts scene, opened its doors to the public on Friday, March 9th. Pairing Food With Art
Emphasizing fine Mexican food as well as art, Taco Chelo combines the talents of Restaurateur Aaron Chamberlin, Artist Gennaro Garcia and Chef Suny Santana, who first began honing his craft under the tutelage of his mother as a child on a farm in Monterrey, Mexico.

“Taco Chelo celebrates great food as well as great art, creating an experience unlike anything else in the Valley,” said Chamberlin, of St. Francis and Phoenix Public Market Café fame. “In terms of culinary and artistic talent, we’ve got the real deal, and it’s showcased in our menu, on our walls and throughout the restaurant in its entirety.”

The art adorning the space, including custom-made installations from Mexico as well as hand-designed tile and brick accents, comes compliments of Gennaro Garcia, an internationally known artist and restaurant decorator who hails from Sonora, Mexico and serves as a partner in the business.

“What we worked to create here is an experience that caters to all senses,” Gennaro said. “I see this restaurant project as an ongoing art installation and a collaboration of the visual and culinary arts.”

From Behind the Line
While tacos are the undeniable focus of Taco Chelo’s menu, Chef Suny will also serve up a revolving list of carefully crafted sides inspired from his own mother’s recipes, among them chicharrones, chips and guacamole and frijoles a la charra, pinto beans stewed with bacon and pico de gallo.

“Downtown is experiencing a renaissance, now home to world-class arts, culture, nightlife and great culinary concepts that showcase the flavor of Phoenix,” said Mayor Greg Stanton. “Taco Chelo — a restaurant with an emphasis on both food and art — is a great fit for Roosevelt Row. I can’t wait to try what Chef Suny Santana is cooking up!”