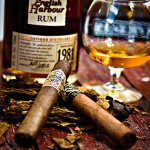 In the land of pizza and tacos The Breadfruit & Rum Bar is like a soft breeze, inviting you to imbibe and delight in coastal flavors right here in the desert.

The restaurant, co-owned Dwayne Allen and Chef Danielle Leoni, has taken residence on downtown’s best lists, was designated a “Smart Catch” by the James Beard Foundation, and has contributed a spicy dash of Jamaican culture to the downtown Phoenix community.

With these accolades it’s as if we should be throwing a party for them, but instead they are shutting down their street and inviting the public to celebrate their 10th anniversary at an Arizona first: a rum festival. Inspired by their 10-year milestone, we asked Allen and Leoni to talk about their decade in downtown.

What inspired you to open a Jamaican restaurant in downtown Phoenix?

We both fell in love with downtown Phoenix while working at City Hall. We were particularly attracted to the creative energy that permeated the area.

What drew you to your location on Pierce St.?

One of the most unique features of the building that houses The Breadfruit & Rum Bar are the ocean blue awnings. These are reminiscent of the kind of adornments commonly found in the tropics.

What is one thing you learned or experienced from opening a restaurant in downtown Phoenix that you never would have anticipated?

The necessity of community support. It is immensely critical for a restaurant, especially one as unique as ours, to be embraced by its neighborhood. We first had to earn the community’s trust by demonstrating that we were here to do more than just make a profit. What is your personal favorite dish that you serve? Favorite drink?

We like to think of each dish or drink to be a favorite in its own right. Our menus is intended to provide a variety of experiences that take you on a culinary journey. From one plate to the next, no two are alike so it’s impossible to pick just one.

Other than Breadfruit & Rum Bar, where is your favorite place to eat or drink in downtown Phoenix?

Nobuo at Teeter House. Get the Grapefruit and Hamachi! Downtown has evolved in 10 years. How has your business changed since you first opened?

The Breadfruit & Rum Bar has grown up to be a destination in downtown Phoenix. In the early days, we were so focused on keeping the “wheels” on that there was next to no time for artistry or consideration of our ecological impact. Today, we have the space to tell a compelling story in a responsible and sustainable way.

What is the best thing about being located in downtown Phoenix?

We’re surrounded by artists and lots of other creatives. Downtown Phoenix gives us a kind of freedom to play with form and be fully expressive in our food. We can serve a whole Vermilion Snapper, head, tail and everything, instead of “the Salmon” and be loved for it.

What is the most challenging thing about being located in downtown Phoenix?

We see The Breadfruit & Rum Bar as an ambassador for downtown Phoenix. As such, convincing folks in the rest of the valley that this is not your parents’ or grandparents’ downtown is a challenge that we gladly take on any day. What do you hope the future will look like for Breadfruit & Rum Bar in another 10 years?

Our focus today and for the future is sustainability. We intend to continue to lead the discussion on seafood sustainability in land locked states, as well as championing the continued development of our local food systems. We intend to be more than a restaurant; we plan to be an example of good community stewardship through food.

What advice would you share with others who have a unique business idea?