Food Critic Dominic Armato Takes a Seat at the Table 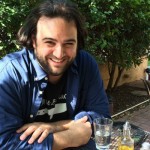 Arizona Republic Dining Critic Dominic Armato will be in the company of several award-winning chefs as he covers the AZcentral Food & Wine Experience this Saturday and Sunday, November 7 & 8 at Scottsdale Fashion Square. A position that he fell into “accidentally on purpose” less than six months ago, Armato is hardly intimidated by the spotlight. Dominic Armato on the patio at Cibo in downtown Phoenix.

In a previous life, the self described “food geek” was the voice of Guybrush Threepwood in the classic video game series, Monkey Island, and he even dabbled in acting. But it was ultimately his passion for and desire to influence the local food scene in Phoenix that landed him the “big-time food critic” role.

Armato’s well-respected food blog Skillet Doux was his sounding board for years, first in Chicago and then in Phoenix. Through this platform he tried to help spread the word and help lesser known restaurants get the recognition they deserve. Tucked away in his “nerdy little corner of the food universe,” Armato’s audience was never going to be that big, though his vision for the future of Phoenix’s food scene was huge.

“What I hoping to do was influence the larger food media,” he said. When Howard Seftel announced he would retire from his 23-year career as the Arizona Republic dining critic, Armato’s dream of having such an influence became a reality. And since the Republic had a new direction for the position in mind, there were several conversations that had to happen first.

“The more we talked, the more I started to realize that what they were looking for in the position is exactly what I would have done with it,” he said. “It got to the point where it was creepy, and I thought, ‘Okay, I gotta go for this.’”

After “letting it all hang out” in his interview — sharing with the Republic the major changes he would like to see happen with the role, such as dropping the anonymity, his approach didn’t come as a big surprise. “I think they knew what they were getting into,” he said.

With nearly six months under his belt, Armato sees his role as more of a “guide” than a critic. And with his Italian heritage and extensive overseas travel to places like Japan, China and Italy, he has a deep appreciation for traditional food, but he’s also the first to admit that he doesn’t know everything.

And that’s where his food blogging background comes in.

Unlike popular restaurant review websites such as Yelp, which Armato says is “destructive” just by its structure, Armato’s experience with food blogging was more about conversation and learning, and he wants to use his voice to help educate the wider food community.

And as for the downtown Phoenix food community, Armato said that there are some really great things happening.

“I love what Bob Tam’s doing over at Bitter & Twisted,” he said. While Armato said there is a lot of “schlocky” Asian fusion food out there, he said that Tam’s approach is different. “He is a chef who does outlandish stuff,” he said. “It’s crazy, off the wall bar food, but the reason they’re so good is he understands what makes the traditional dishes tick.”

“Basically, he knows the rules before he breaks them,” he said.

Armato said another restaurant that’s skilled at artfully breaking the rules is Nobuo at Teeter House.

“There’s a reason that (chef) Nobuo won a James Beard Award,” he said. “It’s completely deserved and the dude is amazing.”

From Japanese to Italian, Armato enjoys a diverse array of ethnic dishes. Describing it as a “collision of culture,” Armato is particularly fond of Peruvian.

“It’s a natural fusion of Indigenous, Spanish, Japanese, Chinese and even some African influences,” he said. “It’s unusual, vibrant and refined creative food.”

Noting that Phoenix’s El Chullo Peruvian restaurant at 7th Street and Virginia is on his “to-do” list, Armato suggested Peru’s “killer ceviches” as a good foray into Peruvian cuisine. For those who are experiencing Peruvian food for the first time, Armato added that everyone likes the Lomo Saltado, which, put simply, is beef stir-fried with french fries. The Breadfruit & Rum Bar is another restaurant that Armato said he frequently brings up in conversation.

“Where else does one get slightly upscaled refined Jamaican food?” he said, describing co-owner Dwayne Allen as a “rum savant.”

Given his Italian heritage and his numerous travels to Italy over the years, Armato definitely knows some great pizza spots in the Valley, include Pomo Pizzeria in downtown Phoenix.

“If you’re a food geek, you don’t replace going to Italy,” he said, but spots like Pomo and Scottsdale’s Andreoli Italian Grocer come close.

As someone who said he would rather sit on a stool in the back of an alleyway and eat something completely incredible, than to eat a mediocre meal in a fancy atmosphere, Armato has an important message for diners: Don’t be afraid to take risks.

“We eat like we’re afraid to fail,” he said. “ But in the long run you’re going to be able to look back and have way more amazing dishes.”

What: AZcentral Food and Wine Experience