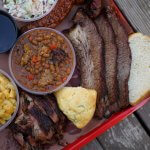 Trapp Haus BBQ fuses slow-smoked championship-style BBQ with urban Southern cooking in a restaurant with a decidedly New York vibe. Uniquely designed for the surrounding urban-style living, residents are welcome to sit down and enjoy a home-cooked meal in the relaxed environment, or the business crowd and busy families can choose to “grab and go.”

Owner Phil Johnson, aka “Phil the Grill,” has made a name for himself on the competition BBQ scene, earning numerous awards from the Kansas City Barbecue Society, including Grand Championship on the prestigious Sam’s Club National Pro BBQ Tour, and a 2nd place pork win at the American Royal World Series of Barbecue Invitational.

Prior to opening Trapp Haus BBQ, Phil ran Sammitch, a successful food truck that earned a loyal following most notably for his “Philly Crack Wings,” which are set to appear on his new restaurant menu. The Sammitches, for which Phil has been recognized as one of the top 10 food trucks in the valley, are a mainstay on the menu.

Defined by Phil himself as “a term reserved for only the mightiest of all sandwiches… a true work of culinary art; a feast on a bun,” these sammitches will certainly satiate the heartiest of appetites.

Classic BBQ platters with a choice of two sides are also available with the following options:

Sides round out the menu and are priced at $3 for a small $5 for a large:
· Crispy Waffle Fries
· PTG Baked Beans
· Mean Greens
· Honey Jalapeno Coleslaw
· Cheesy Jalapeno Grits

“It has always been a dream of mine to open my own BBQ joint,” Phil says of his new concept. “Trapp Haus BBQ is the combination of my Bronx background, my skill in competition-style BBQ and my desire to give people good food that is made with my heart and soul.”