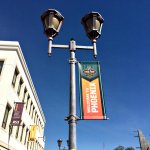 Whether this is your first or 50th trip to downtown Phoenix, here are some fun things to know as you explore the urban core of the 6th largest city in the U.S. The Phoenix Convention Center (home of the Final Four Fan Fest) and its logo were designed to resemble a desert canyon.

Downtown Phoenix is a hub for professional sports as it’s the home of the Arizona Diamondbacks baseball team, the Phoenix Suns and the Phoenix Mercury basketball teams and the Arizona Rattlers arena football team. Valley Bar, a favorite downtown basement bar and music venue, features a menu of specialty cocktails named after famous and infamous Arizona politicians, including the “Sandra Day Old Fashioned,” the “McCain” and the “99 to Fife.” Also, be sure to check out the permanent art installation above the bar that tells the story of 1930’s “Trunk Murderess” Winnie Ruth Judd. The March Madness Music Fest takes place in Margaret T. Hance Park. Flowing under the park is the Interstate 10 freeway. This stretch of the freeway was the last section of the I-10 to be connected. The park was built to keep the historic neighborhoods connected (following the demolition of historic buildings to build the freeway.) Burton Barr Central Phoenix Library was designed by Phoenix architect Will Bruder and the skylights on the top floor are designed to capture the light on the summer solstice. Like the map scene in “Raiders of the Lost Ark” without the blinding flash of light.

Roosevelt Row was named one of the “Top 25 Most Instagrammed Art Spaces” in the Country in 2016.

The “Release the Fear” statue on Central and Roosevelt was erected in 2005 by Phoenix artist Robert John Miley. It is composed of 8 1/2 tons of metal, 8,000 lbs. of which came directly from weapons used in violent acts throughout Arizona. The Arizona State University Downtown Phoenix campus opened in 2006, making it one of four ASU campuses. Its student population has grown to 11,737 over the past 10 years.

The Downtown campus is home to seven of ASU’s colleges and schools, inclusing the Walter Cronkite School of  Journalism and Mass Communication and the Sandra Day O’Connor College of Law.

Adjacent to the ASU campus is Civic Space Park. It opened in 2009, creating a 2.7 acre grassy oasis with a 145-foot tall public art piece called “Her Name is Patience,” design by internationally recognized sculptor Janet Echelman.