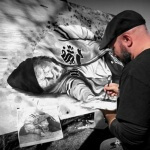 Our Phoenix Discovered series (PhD for short) shares essential insight into downtown by introducing people and places that define our unique culture.

Time and again it’s proven that what makes this city great are the people – particularly the people who believe in this place so much they are willing to go “all-in” on their projects and stop at nothing to ensure that they come to fruition. Robert Gentile is one of those people who is truly dedicated to his craft and Phoenix is fortunate to have him. Born in New York, Gentile moved to Phoenix in 2008 to be closer to family. After feeling like a tourist in a strange land for a few years, he finally settled in and has felt like a resident ever since. Earlier this year he took it one step further and placed himself downtown at an artist community, the Oasis on Grand. The relocation not only made it more convenient to work on projects downtown, but it literally put him next door to his latest venture, the Grand ArtHaus.

Grand ArtHaus is an independent, artist-run collective that operates as a shared studio and co-working space, as well as a gallery and event space. After a soft opening during Art Detour in March 2015, the gallery hosted its grand opening and displayed its first exhibit for September’s First Friday Art Walk. The show featured work from each of the resident artists, including Lauren Lee and Lucinda Yrene, as well as a collaborative show between local artists Lalo Cota and Tato Caraveo.

After a few minor setbacks in the beginning, Gentile spent the hottest months of the summer on the build-out and the final result was an amazing space that any artist would be thrilled to have at their disposal. Gentile’s role as operations manager makes him responsible for accommodating resident artists and handling the day-to-day workings of the space. Not only that, Gentile is an artist himself and is known throughout Phoenix for his urban contemporary style. Gentile blends his fine art training and techniques with his passion for street art and graffiti subculture, resulting in bold and powerful imagery that speaks straight to the heart. As a father and a Doctoral Academic Counselor at the University of Phoenix, Gentile found it difficult to dedicate any real time to his craft until he had an opportunity in 2014 to take part in Thermal Phoenix, a three-month long art competition that took place at the MonOrchid. As the winner of the competition, Gentile not only received the prize of a solo show the following year, he also discovered, “…that creating something for my own personal reasons can affect others and it can have meaning to them.” Gentile’s ‘Mermaid in a Bottle’ mural.

This revelation was the key to realizing his potential as an artist was far greater than he believed. After that, he began taking steps in the direction of becoming a professional artist and his career began to pick up speed. Now, his work can be seen all over Phoenix in both commercial and public locations. Some of the most notable would be the State 48 Brewery mural, The Nile Theater sign in Mesa and his Mermaid in a Bottle, located in the Warehouse District at 8th ave and Madison.

Looking forward, Gentile intends to continue developing himself as an artist, as well as play a role in the progression of the Phoenix art scene. Says Gentile, “I would like to see this city’s art reputation turn into something similar to Art Basel in Miami. Where this is a place to be, a destination for art… I want to see the community come together, to see the businesses in the area benefit as a whole from all the attention. This really has the potential to be something great.”

With people like Robert Gentile putting in the effort and living his dream every day, Phoenix can expect to get there sooner than later. Be sure to follow Robert for upcoming projects and events.