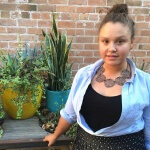 In DPJ’s Street Style PHX series, we hit the streets in search of the looks that define our city style.

At first glance, Ashley Baker might strike you as the average “woman in her early 20s” type. But if you pay close attention, you’ll see that her unique sense of style says there’s much more to her story. At only 21 years old, Ashley Baker’s philosophy on fashion transcends that of her age. A recent BFA graduate of ASU’s School of Film, Dance, and Theatre, Baker learned the importance of fashion from a young age. Growing up as a ballerina at the School of Ballet Arizona, Baker was taught that the clothes we wear are more than just a function of practicality.

“We were always reminded that the clothes we wear both inside and outside the studio represent who we are, and what we want to say to the world,” Baker said.

And on a random Thursday in downtown Phoenix, Baker stopped into Lola Coffee Bar for a cup of its signature hot chocolate before teaching dance at Phoenix Center for the Arts. Her ensemble wasn’t loud or flashy, but it clearly communicated a sense of confidence and individuality, which she partly attributes to her classical dance training. Dance has taught Baker to be confident with her decisions in life and in fashion.

“Ballet is all about awareness of self, failure, and growth,” Baker said. “I think having that exposure to awareness opens up what I feel is possible in my fashion,” she said, adding that she doesn’t easily feel ashamed or embarrassed.

“To stand by your choices gives you a certain amount of agency,” Baker said.

At a time when many women take the less is more approach to fashion, Baker’s flowing chiffon skirt stood out in Lola Coffee Bar. The pleated polka dot fabric had a vintage vibe, with a hem that fell modestly below the knee. A gift from a previous boyfriend’s mother, the skirt is a vintage piece from 1980’s Ireland. Contrasting the feminine flow of her skirt, Baker’s chunky black lace-up ankle boots gave her outfit an edge. “I am obsessed with boots,” Baker said adding that she loves her black lace-up boots because they’re comfortable, flattering and the chunky heel makes her taller.

A gift from her mom, Baker’s sketch-like floral New York and Company necklace adds the right touch to her ensemble. “It makes just enough of a statement without being too much,” Baker said.

As someone who’s often seen wearing bold colors, Baker said she loves incorporating different textures, and she describes her style as “quirky.” And to top it off, when it comes to fashion, Baker isn’t afraid to breaks the gender barrier.

“The button up shirt is from my boyfriend,” Baker laughed. “I wear what I like and feel good in,” Baker said. “I think that feel is genderless.” Baker says she is “obsessed” with boots and loves the height and comfort of her chunky black pair from H&M.

Although Baker currently resides in Tempe, she still spends a lot of time in downtown Phoenix. After graduating from Arizona School for the Arts in 2012, she has watched downtown grow.

“From what I have seen, the development teams are trying to stay true to the past and to the communities that engage with the downtown area,” Baker said. “I definitely always hope for space that encourages love, support, and an understanding of community,” she added. Baker’s floral necklace was a gift from her mother.

When she’s not dancing, Baker can be found teaching at Phoenix Center for the Arts, or working at the Ballet Arizona box office. And if you attended Scorpius Dance Theatre performances at Phoenix Theatre during the past two seasons, you may have even seen Baker perform.

Baker is also the founding director and resident choreographer of All Bodies Dance Collective, which will be performing at PCA’s upcoming Beta Dance Festival on June 11.

Although Baker said she thinks that life as a dancer sometimes makes her overly critical, she has learned more about the importance of knowing herself, and building confidence in her personal style in the process.

“It has pushed me to take risks, and be true to the things I love,” she said.