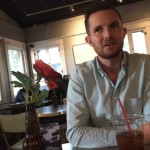 Read Part 1 of this series.

The tale of the Wurth House’s journey across the street picks up in 2010 with a man named Alex.

Alex is a young man with reddish hair, a trimmed beard, and a soft-spoken, genteel demeanor that gives away his Southern roots before you know a single detail about his life. When he tells his part of the story, it’s with a drawl uncommon to Phoenicians. It sets him apart, and for the duration of the conversation, slows down the pace of Roosevelt Row. Born and raised in Kentucky, keen on adventure, Alex decided in 2010 to set an imaginary 4,000-mile radius around his hometown and then move someplace outside of it. “I actually went when I was younger on a road trip out to Four Corners and through Arizona,” he says, “and I just remember it being so different, and just a really fun place. So I decided I’ll just give Phoenix a chance.”

His first stop was in Mesa, but a few address updates later, Alex took on the role of Special Events Manager for the Children’s Museum of Phoenix, two blocks from the Wurth House, and found himself living in an apartment building on Roosevelt Row, directly across the street from the house.

All of this would change. Alex, after all, is a Wurth.

In 2010, Roosevelt Row was still years off from being named one of America’s Best Places by the American Planning Association. Kimber Lanning had become a permanent part of downtown Phoenix, one of the key business owners vested in retaining the street’s historic buildings and simultaneously building it up as the city’s cultural core. By 2015, this mission had lead Kimber to an endless stream of public speaking appearances, one of which was at the children’s museum, where Alex Wurth was in attendance. Alex saw her speak a few other times as well. And once, Kimber took a tour of the museum guided by Alex.

These would not be the reasons the two would meet, however. These were mere coincidences. Alex and Kimber wouldn’t meet until after the house that Alex’s great-great-uncle Felix built had moved 129 feet to the south side of Roosevelt.

Before that could happen, Kimber had to meet John McCullough.

In early 2015, despite that USA Today had recently named Roosevelt Row one of America’s top 10 arts districts (and likely because of that fact), the row was losing several historic buildings to new development. One of them was the Wurth House. Vic Armstrong, who took over the house after Joseph Wurth, had passed away. The house had since been acquired by Armstrong’s daughter and son-in-law, Debra and Sam Moyer. In early 2015, the land it sat on was about to be taken over once again, this time by commercial developers. The house was set to be demolished.

Kimber stepped in to fight, hoping to take control of the house and keep it alive herself.

Kimber contacted the Moyers, offering repeatedly to buy the house. Every attempt was met by rejection. Mayor Greg Stanton got involved, making calls to help out. Councilwoman Kate Gallego showed up to meetings and offered her help as well.

For weeks, Kimber went to work every day at Local First AZ wondering if today would be the day she’d come around the corner to see the house had been destroyed.

This went on until the Moyers realized just how much it would cost to demolish the house. Twelve grand is no small investment just to make something disappear. They gave in, ultimately deciding to donate the house to Kimber. It was a great sign of hope, but there was a long ways to go. For starters, Kimber would have to move the house to clear the land for the developers who now owned it.

To find out how one goes about doing such a thing, Kimber called Tom Carmody.

Tom has an even longer history on the row than Kimber — a very important history. “Tom Carmody sold Modified to me,” Kimber says. “He sold Eye Lounge to Greg and Cindy. He sold the Carly’s building to Carla.” Basically, he’s the man who used to own a good chunk of what we know now as Roosevelt Row. Right about the time Phoenix was considering building an NFL stadium in the middle of Roosevelt St, “[Tom] said, ‘You know, I’ve been reading about you in the paper and I understand you’re fighting to preserve this neighborhood. You’re never going to win as a tenant. You’re gonna have to buy.’” Kimber asked him if he’d sell her the building. He said he would, as long as she would keep up the fight. “He’s one of those behind the scenes heroes that people don’t often hear about.” After the sale, Kimber delivered a card to him that read, “When I’m a little old lady, I’ll remember you as the guy who gave me a chance.” When she tells this story, she remembers that it brought tears to his eyes, and she smiles.

When Kimber called Tom in 2015 to ask about moving the Wurth House, he sent her directly to John McCullough. Kimber soon uncovered several things about John. First, he’s a “salt of the Earth” kind of man who doesn’t like to talk much. Second, he was one of only two people left in the state capable of moving a house from one side of a street to the other.

John started his company Move A Home in 1967. Since then, he’s moved over 200 of them, including many that were displaced by the construction of State Route 51. By the time Kimber had reached him, he was understandably over it. He let Kimber know he was retired, expecting that to be that.

Kimber being Kimber, she persisted, and John gave in, agreeing to come by the house to take a look. When he did, Kimber recalls, he looked over at her and said — and she mimics this in a booming, gritty voice — “I like you. You get stuff done.”

And that’s just shortly before John McCullough went into a coma.

Read Part 3 and Part 4 of this series.