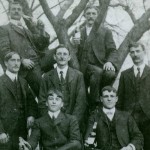 “I was visiting my family in Kentucky,” says Alex Wurth, “where I thought that all of my family were living, and I was on vacation there, and up on my Facebook news feed, I see that the Wurth House is saved by Kimber Lanning, and it’s moved across the street.” The Wurth House moves across the street.

He knew nothing at the time about his great great uncle Felix Wurth. He didn’t know Felix had built a house on Roosevelt Street. He didn’t know that 100 years after Felix had made his way to Arizona, Alex unknowingly, unwittingly, had followed Felix’s path — a distance of 27 hours by car — with bizarre precision, eventually coming to live and work within feet of where Felix Wurth spent a good chunk of his life, got married, and raised six children.

“At the time, I was actually living right across the street in an apartment building,” he says.

Alex was so close to stepping into his great great uncle’s footsteps, in fact, that he had to pass the house every day on his way to work.

A few weeks after reading the article, curiosity finally pulled him in to the story of the Wurth House. Alex emailed Kimber Lanning to thank her for her investment in Roosevelt Row’s history and to ask if there was some connection between the house and his family. In his email, he said he didn’t think he had any relatives in Phoenix.

Kimber connected the dots. And they were big dots. Fresh dots. Alex’s email showed up just days after Bridget Ronan came down from Prescott to meet Kimber, along with her two sisters, and to see the home from their childhood memories.

Alex remembers this email as being written in all caps.

This is why Kimber had to email Bridget Ronan just one more time — to tell Bridget about her newfound second cousin Alex.

“That was the awakening,” Bridget says, “that, hey, there’s this relative of ours that has been in the Phoenix area for a couple of years and we’d had no knowledge whatsoever.”

Alex learned about his family, about his uncanny repeat of Felix Wurth’s trek to Roosevelt Row. Bridget and her sisters and their mother Angela learned about Alex. They all learned about John McCullough. And Kimber learned substantially more about the house that she’d spent so much time, money, and energy trying to save.

After months of darkness for Kimber Lanning and the Wurth House, there was now light in all directions.

The house has just a few problems. The kind that cost a lot of money to fix. Between moving the house, the reengineering required for it to be put back into use, and a host of other expenses, the saving of the Wurth House will cost upwards of $79,000.

The light rail wasn’t even supposed to stop at Roosevelt Row. Now, it not only stops there, the street is designated as an arts district. One so good, in fact, that it was named one of America’s Top 10 Arts Districts by USA Today and one the best neighborhoods in America by the American Planning Association.

“Downtown has undergone a complete revitalization,” says Kimber. “You’ve got the big and the small advancing together. And that’s how you build a great city.”

Amid these determined words, Kimber reflected on the house’s meaning to her.

Back in the late ‘80s, she recalled, a couple of junior-high kids were watching a homeless man in front of the house. She thought about “how it must be so hard to grow up in a neighborhood where you see that.” In her mind, the kids were seeing and grappling with something tough, something bad — the bitterness and desperation city life can bring with it. But then the scene changed. One of the kids, who had been carrying a large fountain drink, emptied the entire cup on top of the man. The boys then ran away.

“That was the first time I ever truly focused on the Wurth House,” she says, “and I started thinking what goes on in that house and who lives there.”

She pauses for a moment and says, “That’s what I was thinking of the day they jackhammered out the porch in order to lift it.”

Under threat of destruction, under pressure from builders, under the weight of mounting bills, and almost without the one man who could move it across the street, the Wurth House story almost died a hundred deaths.

It stands now 129 feet away from where it was built over a century ago by a man who may or may not have had allergy problems. It sits surrounded by a family whose members didn’t know each other until a desperately ill man and a champion of downtown renewal and history put it there.

When it reopens as a shared space for Local First offices and as a Roosevelt Row welcome center, it will feature a book on permanent display containing the names of those who contributed to help save and restore the house. Some benefactors will have their names permanently engraved into the bricks that make up the house’s 104-year-old walls.

A city’s culture develops over a long timeline. Think Boston, where modern skyscrapers sit next to 300-year-old churches, bringing the new and old together to create a sense of time and place and history. Things like the Wurth House are what contribute to it. Thousands of people have put up thousands of fights all over the country to save such history, to create such culture. The Wurth House is Kimber Lanning’s fight. Her stake in Phoenix history. As it is for Kimber, it is for us. The Wurth House is our history, our culture.

This story is but a piece of what Phoenix is, was, will become. Everyone interviewed for this story, at some point, said they wanted to thank Kimber for all her work in saving the house. They weren’t shy about it, not at all reserved. They were effusive. Their gratitude alone was enough to stress the significance of this story to their lives, to their histories.

If Kimber Lanning hadn’t taken on the fight, there would have been no fight to win.

If John McCullough hadn’t come out of retirement, hadn’t made it through a terrible illness, and then a coma, and come roaring back, the house would have been destroyed.

If Alex Wurth hadn’t unknowingly followed his great great uncle’s path to Roosevelt Row, he’d have never known about Angela, Bridget, Felix, or anyone else in this part of his family, his Kentuckian roots.

“It just shows you how small the world really is,” says Alex. “We’re all just so connected.”

Soon after Kimber Lanning connected one part of the Wurth family to the other, the family members planned a reunion — the kind where strangers would meet for the first time. They invited Kimber to join them. She did.

The gathering took place at the home where Angela Ronan (Bridget’s mother) now lives. Angela is 96 years old. She is wheelchair-bound. She is the only living child of Felix and Mary Wurth, the couple who started it all.

When Angela saw Alex — his reddish hair, his young face, his trimmed beard, his Southern demeanor — she reached up, took his hand, and asked a simple question that took over a century to ask.

Then Angela bowed her head and held Alex’s hand to her face as tears began to slide down her cheek.

“These are tears of joy,” she said.

Help Kimber restore the house that would not crumble at www.WurthHouse.com.